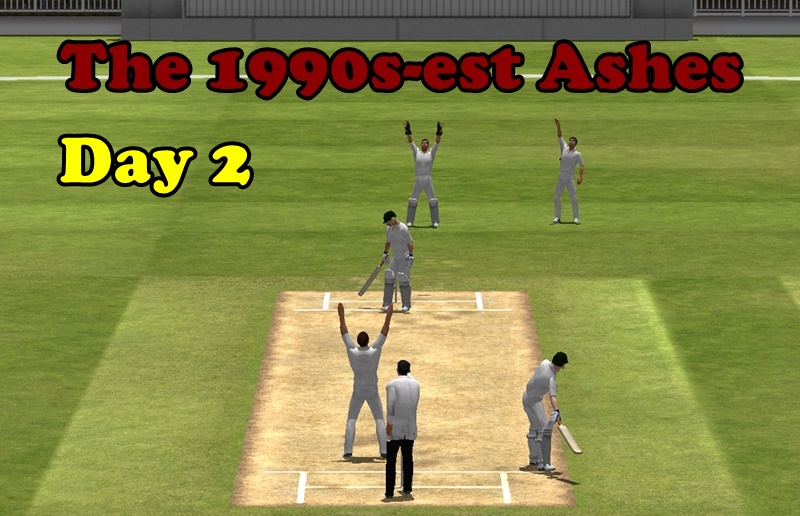 Michael Bevan and Ian Healy walk to the crease at the start of day two. England will be keen to break the partnership early. They have a ball that is only eight overs old.

There’s a bit of cloud forecast for the afternoon session, but little chance of rain.

Devon Malcolm starts with five catchers and a short mid-on. At the other end, Alan Mullally bowls to a packed off-side field.

There are boundaries on offer for Bevan, but he looks uncomfortable against Malcolm. The bowler pushes him onto the back foot and then knocks back leg stump.

On commentary, Jonathan Agnew makes a snide reference to Bevan being a one-day player.

Wary of overbowling Malcolm, Mike Atherton replaces him with Mark Ealham. New batsman Brendon Julian on-drives him over the in-field for four. Shot!

Mullally beats Julian outside off. Quite a way outside off, if truth be told.

Tufnell comes on and play alternates between appeals and fours.

Julian inside-edges Ealham and Alec Stewart leaps like a crested salmon to take a blinder down the leg side.

Malcolm comes back for a quick burst just before lunch and it does not go well.

Mullally is starting to look tired, but eventually he finds Healy’s edge and Nick Knight takes a fine diving catch at slip. Damien Fleming scores 10 runs off his next three balls. Mullally is overdue a breather.

Australia are pretty much slogging now. Ronnie Irani is going for runs but repeatedly hitting the pads. Malcolm is only going for runs.

Time for a change of tempo. Tufnell returns and bowls a wicket maiden.

Mike Atherton and Nick Knight walk to the crease. Expectations are not exactly high among home supporters.

There are four minutes until tea.

Damien Fleming has taken the new ball with Paul Reiffel. The first notable event is Knight backing away and square cutting one for four off middle. Demented stroke.

Then he drives one off middle, which is almost as unhinged.

Colin Miller creates the first real chance in the 20th over, beating Knight outside off with one that turns. Miller has shocked everyone by taking the field with plain brown hair.

The game settles into a slow and unremarkable pattern.

England trail by 453 with all 10 wickets intact.