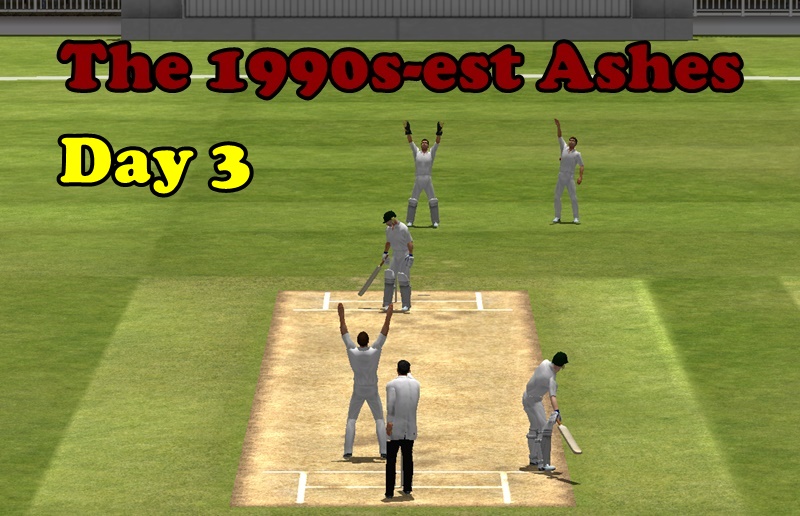 Mike Atherton and Nick Knight walk out. It’s cloudy, but after yesterday evening’s show of solidity, there’s some cause for optimism.

Nick Knight is caught behind off Damien Fleming second ball of the day.

And so it begins.

Graeme Hick arrives at the crease and initially looks okay. He late cuts Paul Reiffel through where third slip could and perhaps should have been. Then he does the same to Fleming.

Maybe he’s going to cut his way to a hundred.

Athers fancies a piece of it and tries the same shot.

He is caught at long off, which, if you think about it, is quite the feat.

A reminder that the next men in are Aftab Habib, Ronnie Irani and Mark Ealham. And then it’s the ACTUAL tail.

The bar is low, but Hick and Stewart play quite nicely up until lunch.

Other than one over from Steve Waugh, Australia are rotating their four main bowlers.

Hick reaches his fifty. Could this be the breakthrough innings?

Stewart reaches his fifty and Australia are down to one slip.

Waugh gets a few overs before the new ball.

Hick is dropped at slip off Fleming, at which point we notice the umpire’s magnificent hair for the first time.

Fine barnet (which is not a fielding position).

With regards to the drop, to be fair to Mark Waugh, he may have struggled to sight the ball, what with it having become momentarily invisible and all.

The new ball does take a victim, however, with Stewart inside-edging Brendon Julian into his stumps for 61 in the last over before tea.

First over after tea, Hick moves across to work Reiffel to leg. It seams in and hits him on the back leg. Plumb.

It was a really good innings, but when people look at the stats in years to come, they’ll have it down as ‘just another fifty’.

After a partnership of 130, England suddenly have two new men at the crease.

And one of them’s Ronnie Irani.

And the other one’s Aftab Habib.

Irani’s beaten first ball. “Poor shot,” says Jonathan Agnew on commentary, imbuing the word “poor” with great depths of meaning – none of it in any way complimentary.

Reiffel beats Habib but both batsmen are hanging in there.

Irani takes a single so insanely casual that even Alan Mullally on the balcony considers it unduly laid-back. He’s lucky to survive the throw.

Michael Bevan comes on for an over of left-arm wrist spin. Irani slogs him for six over square leg.

With probably only about four overs to go, England are looking steady again and so obviously Habib decides it’s a good time to miss a googly by about 18 inches. He’s given out LBW for 29.

Ronnie Irani is hit on the pads, but escapes. Then he steps back from an identical delivery and edges it straight to slip for 44.

It’s hard to criticise him too much. As with his bowling, that’s probably more than England should really have expected from him.

Mark Ealham sees out the day with a couple of nice fours.