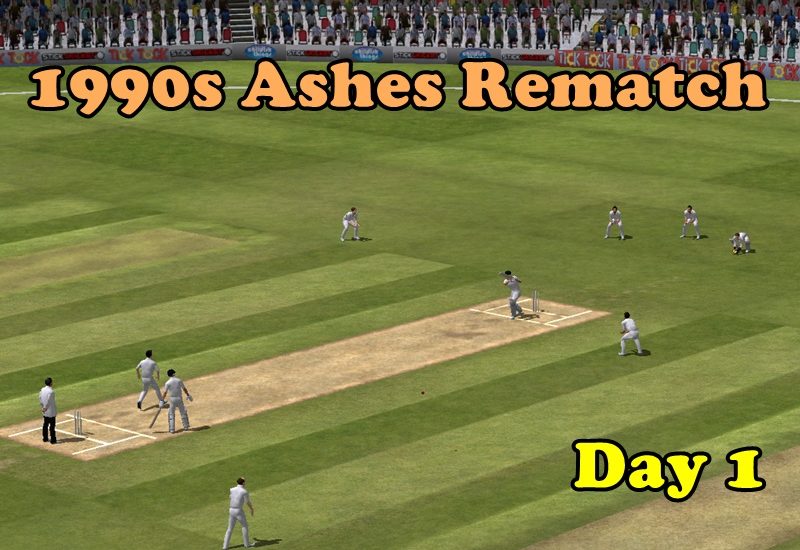 In short, the Australia XI for this match is the same as for the first match, because that is still the most 90s XI. The England XI is quite a bit different because that’s how picking 90s England sides works.

The match will unfold a day at a time. As you have already deduced through the power of reading, today is day one.

Fortunately Mike Atherton is captain, not Nasser Hussain, so England opt to bat.

Looks like there’ll be a touch of variable bounce. Wonder whether it’ll flatten out.

Atherton walks to the crease, Alec Stewart marches in alongside him.

The first 10 overs are pretty calm. Stripped of the keeping gloves and shoved up the order, Stewart strokes three fours, including a beaut straight back over Paul Reiffel’s head.

There’s the faintest hint of a run-out chance too, but prancing gazelle Athers makes his ground easily.

For somewhat mysterious reasons, Steve Waugh gets an over. Brendon Julian beats Stewart outside off.

Back in England, fans retire to bed awash with joy and optimism and also the knowledge that they’ll probably feel completely different about five minutes after they wake up in the morning.

England’s first scoring stroke after lunch is just about the most incredible shot ever played.

And it goes through extra cover for four.

Aware it would be impossible to improve on that shot, England decide to progress almost entirely in singles. Stewart reaches 50.

Australia’s attack is looking either samey or like Colin Miller, but then Alec Stewart puts his bat everywhere but into a gun barrel straight Paul Reiffel delivery and is bowled for 71.

Athers reaches his 50. He could make 400 and it wouldn’t top that shot from before.

It’s been slow going, but nothing is terrible for England yet.

Fourth ball after tea, Athers backs away and under-edges Damien Fleming to Ian Healy for a round 50.

That would have missed leg by about six inches. Quite why he was trying to cut it is anyone’s guess. Maybe he felt like he could do anything in the wake of The Shot.

Hick’s bat sounds like it has a crack or the handle’s coming loose or something, but he’s hitting them nicely all the same.

Until he isn’t. Fleming goes round the wicket and Hick unfurls a forward defensive that would have been late had Fleming been bowling spin. He’s bowled for 30 off 37.

Haunted by memories of England batting collapses past, Hussain and Thorpe spend half an hour refusing to score runs.

Even Healy’s out-scoring them, failing to wrap his gloves around a fairly innocuous Reiffel delivery and conceding four byes.

Hussain finally hits an intense boundary off his 55th ball and moves to 16. Thorpe is on nine off 51.

Next over Hussain intensely nurdles Waugh for four more. The new ball has been available for a couple of overs already. Finally Australia take it.

It’s the kind of score you’d expect to see at the tea break.

Could be better, could be worse. That goes for both sides.