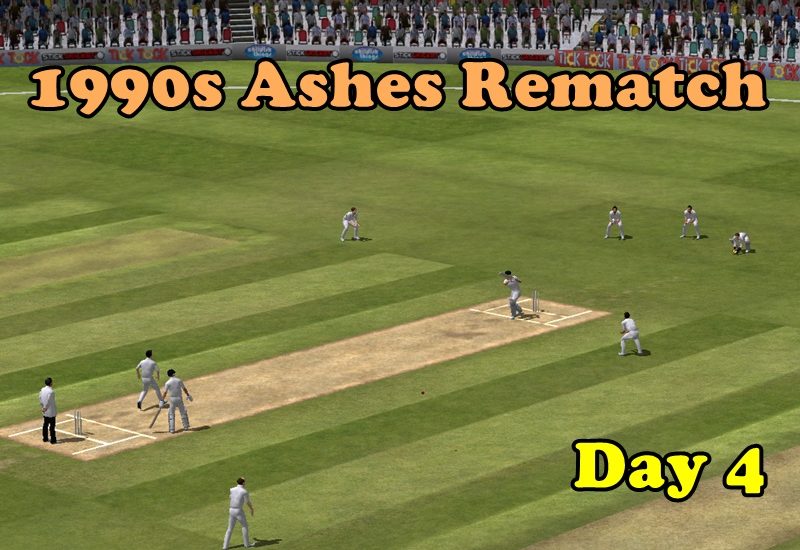 Greg Blewett and Mark Waugh walk out to bat.

The sun is out and the ball is 43 overs old, but the pitch is turning and there’s a bit of erratic bounce too.

Angus Fraser lumbers in to start the day’s play. He has just one slip in, but then he is using an old Kookaburra, so fair enough really.

At the other end, Gough goes full and straight.

Nothing much happens for Gough, but Fraser beats the outside edge a couple of times.

After a hefty, tight, nine-over spell, Fraser is replaced by Chris Lewis. Lewis was expensive yesterday. Mike Atherton responds by setting him a rather more forgiving field.

Blewett hits him for four all the same, but then in the next over Salisbury bowls Waugh between his legs.

Waugh was trying to drive into the offside, yet even at the top of his backlift, the ball was leg side of it. That is not the way to hit a cricket ball.

Another Waugh walks out.

At the other end Lewis’s over results in a chance and then a four before a combination of the two in the form of a thick edged four. With runs on the board, the chances outweigh the runs, so England might as well stick with him for a bit longer.

A couple of overs before lunch, Blewett is caught behind for 81 off…

… who else but Ian Salisbury – unquestionably the greatest leg-spinner playing in this match for England (with the possible exceptions of Michael Atherton and Robin Smith).

With seven overs to go until the new ball, Graeme Hick replaces Lewis. You have to wonder whether England will take the new nut though. Salisbury’s proving their solitary threatening prong so far.

Indeed they don’t take it and Atherton brings himself on for a why-the-hell-not over at new batsman Michael Bevan. Decent LBW shout too. Maybe he should bowl a couple more.

England have leg-spin at both ends.

We repeat: England have leg-spin at both ends.

Bevan nails Athers to the cover boundary, but then the England captain turns one past Steve Waugh’s outside edge. There’s every chance that Test bowling average could drop below 151.00 here.

Conversely, the batsmen seem to be getting the measure of Salisbury. Athers decides enough is enough and takes the new ball.

Bevan drives Gough confidently, but Fraser has a decent LBW shout against Waugh turned down. He grumbles about it with the kind of elite grumpiness that is afforded to only the very few.

Bevan keeps driving fours, so Gough decides to renounce that half of the pitch. Bevan drives him for four off the back foot instead.

The new ball has not been kind to England. The session finishes with Lewis Mullallying it through two feet outside off stump. That was a bad session for England.

Salisbury’s back on after the break but he no longer looks as threatening.

Lewis persists with his wide line and eventually Bevan edges one, but it’s shelled at slip by whoever was at slip. Hick probably.

England are short on ideas, so Gough comes back on to bowl a few yorkers. Bevan hits him for four and then six and then almost gets run out ambling to the other end to reach his hundred. Clown. Good knock though.

Next over Gough has two really, really good LBW shouts against Bevan, the second of which was definitely, definitely out and basically means the whole of the rest of this game is a farce because that was the turning point and England would have won had the umpire made the obviously correct decision instead of the obviously wrong one.

In his next over Gough clean bowls Bevan. (We honestly did a real, actual out-loud swear at the batsman when this happened.)

“Beaten by pace” says the ball-by-ball description of what happened. “I don’t think he even saw that one,” says Jonathan Agnew on commentary.

In your face, Bevo.

Gough beats Healy next ball, the absolute champion, but fails to find the edge.

With Waugh on 96, Athers keeps Gough on for just one more over even though he’s incredibly red-faced. Waugh uncharacteristically hooks him for a wild six to reach three figures before being beaten all ends up (whatever ‘all ends up’ means) by the next delivery. He survives though and that’s Gough done for the day.

The day ends with more run-scoring.

It is a stupid pitch and a stupid sport and this is obviously going to be a draw now unless England can manage to make a king-size balls of things somehow and honestly, we wouldn’t put it past them.

Sorry, it’s been a tough day.