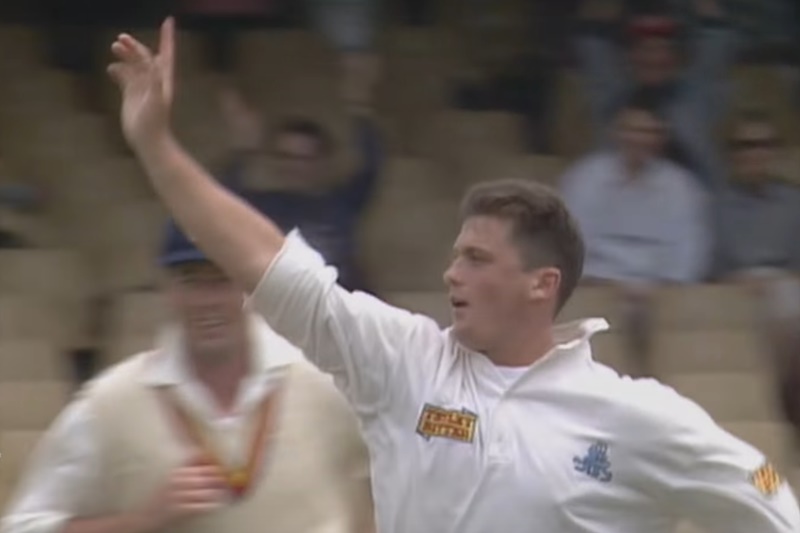 We’ve just been watching Darren Gough bowling Australia out in the 1994-95 Ashes because, you know, why not? (If you want to gain an insight into the King Cricket editorial/creative process, we were sitting looking at our computer screen and found ourself googling “Darren Gough”. Then we watched this video. Then we wrote this article.)

The Sydney Test is best remembered as the one in which Mike Atherton declared on Graeme Hick when he was 98 not out – a really, transcendentally deflating decision for both England players and fans that Athers himself now greatly regrets.

But it was also a match when Darren Gough did Darren Gough things (even if it did ultimately end up a draw). Both David Boon and Steve Waugh were bowled leaving the ball and they were really highly marvellous dismissals that warrant another airing.

Gough was a marvellous bowler who was capable of truly devastating spells of fast bowling during an era when England needed such things roughly twice a Test match.

At the SCG in 1995, he helped England to 309 in their first innings with a highly unlikely 51. (It was his second and final Test 50 and came in his seventh match. The other one was on his debut). He then reduced Australia to 65-8 with a jarring mix of fast bowling and unexpected leg breaks.

Mark Taylor fell to the latter to give Gough his first Test five-for, but it was the first two wickets that were the best.

At 12-1, David Boon attempted to get his bat as far away from a back-of-a-length Gough delivery as he possibly could.

The ball seamed back in and knocked off stump over.

There are two very funny elements to this one.

There was also a great bit where the stump was down and rather than look back at it, Boon just stared at Gough.

It seems kind of weird that he didn’t look back. But why bother? He saw where the ball was going, he heard the noise, he saw Gough celebrating. It didn’t exactly require Holmesian logic or additional evidence to work out what had taken place.

But was the next one maybe even more fun?

At 39-4, Gough really bent his back – because he’s Darren Gough and that’s how he bowled. The batsman, Steve Waugh, first went to play it but then whipped his bat out of the way at the last nanosecond. The ball hit off stump halfway up.

The commentators thought Waugh had played on, but honestly, it was like there was a forcefield around the ball that actively repelled his bat.

This is how close he got to hitting it.

Okay, grainy 90s TV footage doesn’t help us here, but that vaguely spherical blur at the intersection of stump and bail is the ball. At this incredibly late moment Waugh was – we think – in the very process of changing his mind.

It’s absolutely nuts. He pretty much traced the exact trajectory of the ball with his bat, allowing a 10cm gap throughout, even as it deflected off his stump.

This is not just ill-advised leaving; this is elite ill-advised leaving. For that – combined with the fact that he’s Steve Waugh and therefore intrinsically amusing because of how comically serious he always was – we declare Waugh’s leave the funnier of the two.