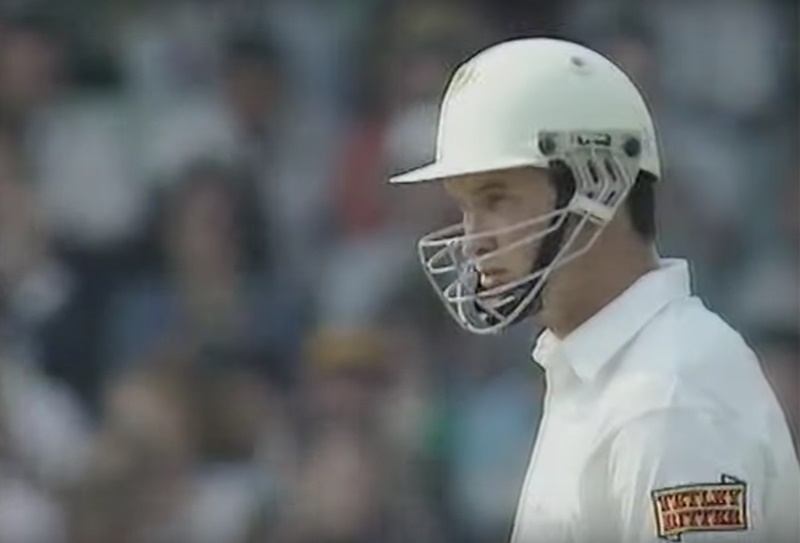 It was both a nail-biter and also a sizeable defeat for England. Michael Atherton’s men were just minutes from securing a draw, but ultimately lost by 103 runs.

A number of readers have pressed us to run another Sim Series. With the whole of Test history to draw upon, there are all sorts of new and exciting things we could do. The one we are most enthusiastic about is ‘exactly the same thing again’.

Well, not quite the same.

First of all, the Ashes being the Ashes, the next match will have to take place in Australia.

We hope you understand by now there is a certain art to authentic 90s team selection. If you were making a TV drama about British teenagers set in the 90s, the obvious way you tether it to that era is with film posters. You’d put Seven, The Usual Suspects and Trainspotting on the wall and you’d think you’d done a good job. But this is wrong. It’s too perfect. It’s inauthentic.

(We haven’t actually ever seen Mr Holland’s Opus. Prince Prefab told us it was about a guy who turns against his son because his son is deaf and Mr Holland loves music so much. Mr Holland writes his opus over the years, but it never gets played and he instead gets ground down by the real world, working as a music teacher. At the end, his students find the sheet music for his opus and they secretly learn it and they play it to him as a surprise and, in Prince Prefab’s words, “his opus is the world’s worst piece of music ever written.”)

The Australia team for the last match was the 1990s-est Australia XI.

In the 1990s Australia didn’t change a winning team.

We have corrected the batting order after mistakenly having Funky Miller down at eight first time around.

No, team selection must be impatient and whimsical and it must also overlook important information.

The aim here is twofold.

Firstly, we must address perceived errors in the selection of our original team. Some selections were questionable, while many favourite 90s players were overlooked.

Secondly, we must create new errors. A 90s England team on which everyone agrees is not an authentic 90s team.

These are the changes.

Opener: Nick Knight is out and the temptation to ask Alec Stewart to open was too great to resist.

Middle order: Mark Ramprakash produced what was arguably England’s best innings in the first match. Batting for a draw, he lasted 203 balls and made 68 runs. The selectors have however put greater emphasis on the four runs he made in the first innings, so he will be replaced by Nasser Hussain.

We have been somewhat resistant to Nasser’s 90s credentials on the grounds that he became such an influential figure as captain in the early 2000s. He did however play 45 Tests in the 90s. Even if this is less than half of the 96 he played in total, he played Tests in 1990 and 1999 and we can’t exactly penalise a man for being dropped a bunch of times in the intervening period, can we? If anything it enhances his case.

Aftab Habib misses out too because of course he does. He is replaced by Graham Thorpe. (Don’t tell anyone, but we secretly want 1990s England to win this next match, so we need them to be slightly less shit. We know it’s just a fictional thing and we’re not taking it at all seriously, but also we are. There is a part of us that watched England lose a very large number of Ashes Tests in the 1990s and was very greatly damaged by the experience and that part of us feels like maybe it could claw back something if the 1990s-est England XI could somehow win a one-off match Down Under.)

All-rounders: Mark Ealham and Ronnie Irani are both dropped because having them in the same team was just too much and no-one could decide which one should keep his place so it was easier to just get rid of both of them.

Robin Smith comes in at six because we slightly regret not picking him first time around.

Chris Lewis comes in too. Skilful, promising, ineffective, mismanaged, highly unpredictable in almost every way – Chris Lewis is a very, very 90s player indeed. He will bat at eight.

Wicketkeeper: Stewart needs to have as many role changes as possible, so as well as becoming opener, he ceases to be wicketkeeper.

Think of modern wicketkeeper-batsmen and you think of dynamic players who can really hit the ball. Adam Gilchrist, MS Dhoni, Brendon McCullum, Matt Prior – the list goes on.

Jack Russell used to saunter in with five wickets down and score at 35.86 runs per 100 balls.

Fast bowlers: It’s the 1990s so we pretty much have to drop all of the bowlers. Bert made a compelling case for Darren Gough to be considered the spiritual heart of the 90s despite playing on for quite a while afterwards, so he’s in for Alan Mullally.

Plenty of people pointed out that Angus Fraser played almost his entire career in the correct decade, so he’s in for Devon Malcolm.

Spinner: Picking our original team, we mentioned that we’d initially included Ian Salisbury on the basis that it would have annoyed people. No-one really acknowledged this, which is a shame, because it would probably have saved you from having him inflicted on you for this next match. We’ve even come up with a flimsy selectorial explanation that we can put forward even though we don’t believe it. You need wrist spin on Australian pitches. It’s tough on Phil Tufnell but only in the sense that Salisbury will probably prove an even greater liability.

Salisbury is the sour note that makes this team authentic. Salisbury is Mr Holland’s Opus.

So this is the XI we’ve got for the 1990s-est Ashes rematch Down Under.

It’s a better team than for the first match, but speaking as the person who has to play the match, one minor thing does strike us: with the exception of Hick, England batsmen of the 1990s really weren’t much use if you needed a part-time bowler, were they? We’re already envisioning Australia being 500-4 and Graham Thorpe having to come on to bowl some medium-pace.

Here’s how things went on day 1 of the 1990s-est Ashes Rematch Down Under.

This website would have been a hell of a lot quieter recently if it weren’t for all the people funding it on Patreon. Big thanks to them from us and also – because we don’t paywall anything – on behalf of all our other readers too. If you like what we’re doing and you’d like to see us to do more of it, please feel free to chip in a very small amount. You can flip us a shiny coin or buy us a pint each month here.