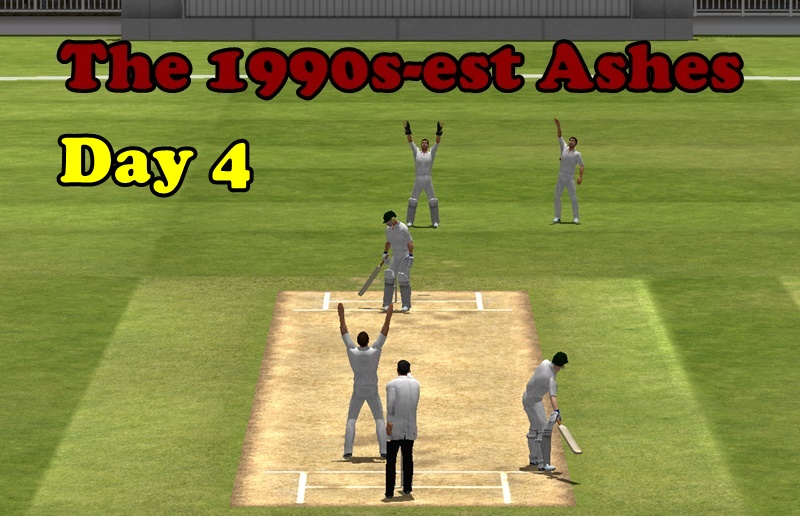 Mark Ealham and Alan Mullally walk out to bat. It’s sunny, but the pitch is turning and uneven. England still need a handful of runs to avoid the follow-on.

A four, a single and a four and the follow-on’s been saved in the first over of the day. That was weirdly anticlimactic.

Mullally is then caught by Mark Taylor at slip off Colin Miller for seven off seven balls.

Devon Malcolm walks in at ten.

Ealham, quite understandably playing a few shots, walks across a Fleming delivery and is LBW.

Tuffers and Malcolm. Ferrets at both ends.

Tuffers is LBW for two.

With 4-98, Damien Fleming was the pick of the bowlers.

It’s not even 11.30am, so even if they keep the run rate down, they’re probably going to have to bat for around four sessions if they’re to save this game.

And even if they skittle Australia for 100, chasing 280 would be a tough ask on a deteriorating pitch. It’s hard to see them escaping here.

Mullally and Malcolm open the bowling. After 10 overs, the former has conceded six runs and the latter 24.

Visibly irritated by the left-armer’s wide line, Mark Taylor hoicks to leg and is caught at mid-on.

Mullally finishes his eight-over spell with 1-7.

Tufnell replaces him. Ealham is on at the other end, bowling pretty much exactly how you’d imagine, which is to say entirely unremarkably.

Those two continue after the break and Australia go precisely nowhere.

Ealham finishes a spell of 0-17 off 11 and is replaced by Graeme Hick. He too bowls tidily.

For a long while, things are very sedentary, but gradually, the fours start to come.

Yes, England still have a slip in.

Seriously, Al – are you taking the piss?

Mark Taylor declares 378 ahead with Michael Slater 98 not out.

Australia’s slow pace means Mike Atherton and Nick Knight only have 20 minutes to survive before the close of play.

It is however worth pointing out that even Mark Waugh was struggling to time the ball. Make no mistake, England have a steep, high thing to climb.

With men clustered around the bat, Athers whips his second ball off his toes for four. He punches a couple of boundaries off the back foot through the covers for good measure.

England need another 360 to win. So basically they need to bat out the final day.