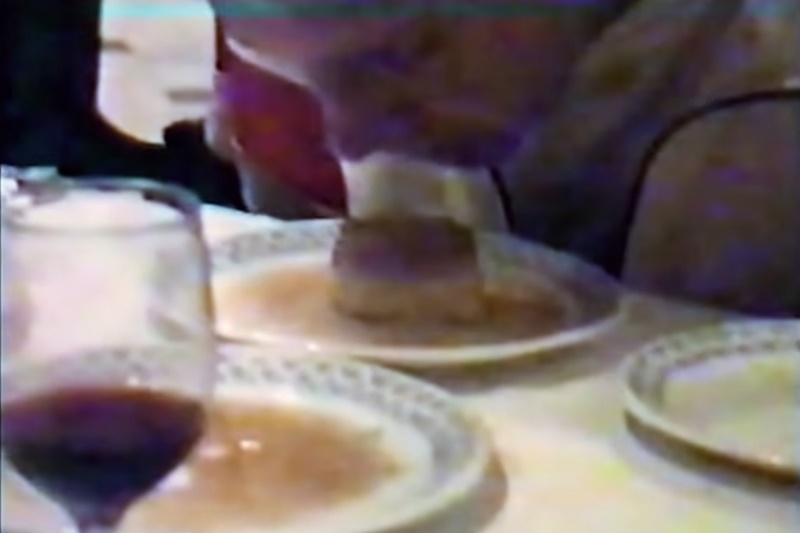 This article is about the time former England off-spinner John Emburey leant over a creme caramel and sucked the whole thing up without using his hands.

We watched Sky Sports’ Spinwash ’93 documentary the other day. More accurately, we finished watching it.

Apparently we watched the first 20-odd minutes over the summer and then completely forgot to watch the rest of it. (It’s also worth pointing out that it took a good 20 of those 20-odd minutes of the rewatch before we were confident we’d seen that segment before. A psychologist could no doubt deduce something about our failing mind from the slow speed of our dawning realisation.)

One of the things we like about Sky Sports is that they don’t just concentrate on successes. They’re quite happy to make an entire feature length film about a 3-0 defeat too. Built around behind-the-scenes footage shot by Dermot Reeve, Spinwash is about England’s highly eventful and highly unsuccessful 1993 tour of India.

The film features a number of striking off-field moments.

Here’s an innocently napping Ian Salisbury about to be roused by smelling salts, for example.

And here’s Graham Gooch absolutely off his mash as a result of illness.

Some of you will also feel quite a strong emotional reaction upon witnessing the scene where Dave “Rooster” Roberts performs minor surgery on Paul Jarvis’s toe and toenail using a penknife.

There are memorable on-field moments too, like Mike Gatting missing the easiest catch in history.

“As a young boy, from the Caribbean, I grew up wanting to be Viv Richards,” he says.

“To have that one day in the sun, in India, where I felt like a Test batsman – and the score suggested I was a Test batsman – I’ll take that one. I would have liked a few more, but to have done it once at least, I enjoyed it much.”

And you can hear in Lewis’s voice that he still enjoys it now.

But none of this is anywhere near as memorable as John Emburey lowering his maw towards a plate and sucking up a whole creme caramel.

According to Gooch, the England team of this era, “used to get them to bring out 20 to 25 creme caramels,” at the end of meals.

We particularly like the “used to” part of that. This wasn’t a one-off. This was a recognised thing that they regularly did.

Mike Atherton reckons that the contests were a competitive business. We can’t imagine why given that Emburey must surely have been in a different league to everyone else.

… this is when he strikes…

… and this is after.

In Reeve’s footage, Emburey can be seen immediately pointing to that tiny flat pancake bit that’s broken off, clearly disappointed with his performance. This is a man operating on another plane of creme caramel inhaling.

There are three key things we need to get across to you here.

Amusingly, Emburey says that he hated creme caramel. He theorises that he became so adept at downing them so that he didn’t have to spend long eating them. Or, you know, you could just avoid creme caramels altogether?

But then that would of course have denied the world his obvious excellence in this sphere, so fair enough really.

Here’s a link to the scene in question.

Quite obviously we would watch this sort of stuff anyway, but we’d struggle to find the time to write about it if it weren’t for our Patreon backers. You can find more details here if you’d maybe like to join them in helping fund King Cricket.