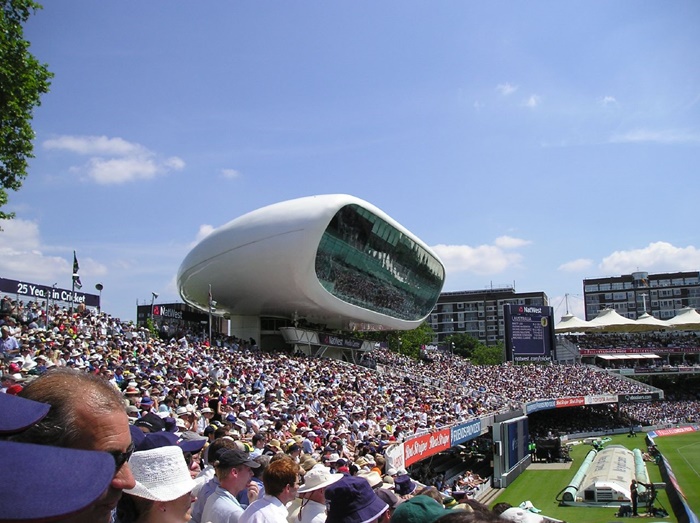 Send your match reports to king@kingcricket.co.uk. We’re only really interested in your own experience, so if it’s a professional match, on no account mention the cricket itself. (But if it’s an amateur match, feel free to go into excruciating detail.)

Regular match reporter Ged Ladd titled this particular missive ‘The Hottest Day of the Year’ – which was dangerously vague of him given our famously laid-back attitude to publishing these things.

Fortunately, he did specify which year within the report itself.

I was running a little late, so I decided to cab it to Lord’s with my picnic (Shanks’s pony or cab being the only sensible options for Lord’s from my flat) in a vain attempt to get to Lord’s ahead of the crush at the North Gate.

I got to my seat with about five minutes to spare, but had already received a text from my friend, Iain Spellright, that he would be a few minutes late.

Iain and I have worked together on and off since the late 1980s. When we ended up sitting in a business meeting again in 2011, I mentioned that this meant we had worked together across four decades. This made us both feel ancient as hell, which we aren’t really.

It was already pretty hot by the time Iain arrived.

“It’s a scorcher,” I said. “Not sure I’d have chosen the Upper Compton for these conditions – seemed like a good idea in November.”

“Yup, not sure I’ll manage a whole day in the sun – let’s see how it goes,” said Iain, who is a rather fair, pale-skinned fellow.

At least my olive skin doesn’t burn, even if my blood is boiling.

“Trouble with the train?” I asked, wondering why the normally prompt Iain had arrived later than usual.

“No, trouble with the brain – I got halfway to the station, then realised that I had come out without my ticket.”

We decided to go easy on the wine given the intense heat, making my rather fruity bottle of Kiwi Riesling go a long way – even with the smoked salmon bagels and then, early in the second session of play,  Hanoi-style bánh mì sandwiches (my cricket picnic dish of the season, but new to Iain Spellright).

The combination of wine, sandwiches and the hottest part of the day made both of us feel the need for some respite from the sun. In any case, I needed to pop around to the Middlesex Shop to collect some tickets for Scarborough, so we agreed to take separate strolls and return to the seats when we felt ready.

On the way back to the seats, I ran into Uncail Marcas and one of his cricket-mad sons, who was absolutely thrilled because he’d just had his photo taken with Big Bob Willis. I admired the photo and related my “meeting Bob Willis” stories to a rapt audience.

Given my chance encounter, I thought Iain might beat me back to the seats, but none of it – indeed as tea approached Iain had still not returned, but by around 3.20pm the sun had conveniently moved to allow the Grandstand to throw a shadow over our seats, as we were at that end of the Upper Compton. The shade and a slight breeze made the afternoon much more bearable. I texted Iain Spellright to inform him of the good news re the shade.

Just before tea, the nice gentlemen sitting next to me asked me if I wanted anything while brought back at teatime.

But more or less as I spoke, Iain reappeared and explained that he had taken some lengthy respite from the heat and had been drinking icy soft drinks in the shade while watching the match on a TV screen.

“No… In fact I still haven’t received it,” said Iain, checking his gizmo.

After stumps, I walked home with my near-empty picnic, the evening temperature being really quite pleasant and the opportunity to stretch my legs too good to miss. Around 9pm I received a text from Iain: “Thanks for a great day. Btw, your text about the shade has just arrived.”