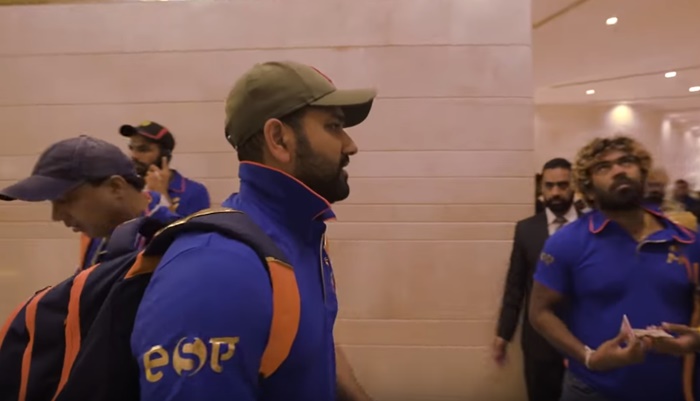 We’ve finished watching Cricket Fever, Netflix’s documentary series about Mumbai Indians’ 2018 IPL campaign. It’s good, and personal experience revealed that even people who don’t especially like cricket may well enjoy it. It’s not a huge and revelatory experience or anything, but we’d say that people who don’t normally enjoy cricket things enjoying a cricket thing is a good result, so well done.

We’ve already given you our three big highlights from the first episode, but it only seems right to give you our overall series highlight as well.

By the end of the series, our very favourite thing was Lasith Malinga lurking in the background of every single scene like a highly conspicuous ghost.

McClenaghan seems a nice guy, but he does have a slightly feral aura and we’ll never quite shake the impression we formed when we first saw him in this bonkers interview a few years ago. The joking-but-also-a-peek-at-a-darker-side screaming at 1m40s. The intimidatory throw at 3m12s. Just imagine that guy lurching up at you out of the water with his mad hair and insomniac eyes.

The way it works is each episode they pick a player or two and interview them about their background so that you get to know them a bit. These tend to be the players who do well or have some sort of crisis in the match or matches that feature in that episode.

After a handful of episodes, we started really looking forward to the Lasith Malinga bit. Then it occurred to us that Malinga wasn’t actually playing, so we figured he was injured. Then we wondered whether he’d been injured for the entire season because we don’t log all of Lasith Malinga’s injuries because life’s too short.

Turns out Malinga wasn’t actually a Mumbai Indians player in 2018. They signed him as a bowling mentor.

But here’s the thing

Lasith Malinga is just about the greatest T20 bowler there’s ever been and he is also a very conspicuous person… but nobody ever mentions him. Not even once.

That’s weird. In a T20 documentary, when he’s right there in front of your eyes pretty much constantly, that’s really, massively, monumentally, jarringly super-ultra-weird.

It’s like he’s a ghost. It’s like he’s a highly visible, immediately recognisable ghost. And once you realise that he’s not going to get a personal background segment and isn’t really going to feature in any meaningful way, you start noticing him everywhere.

Our absolute favourite scene of all is one in the last episode where Mahela Jayawardene is sitting in a plastic chair discussing some player or other with a physio or one of the other coaches (Shane Bond has a definite Murray from Flight of the Conchords air about him, by the way).

Midway through the conversation, Malinga strolls over and sits down in another chair, right in front of them, right in the foreground of the shot. Rather than join in the conversation, he sticks to his lurking detail and just lolls there, occasionally grinning directly at the camera.

“Can you see him?!” you shout at Jayawardene. “Can you actually see him?! He’s right there. Right there in front of you. Is he a ghost? Why can’t you seem to see him? Won’t somebody please for the love of God interact with Lasith Malinga so that we can all be sure that he’s real.”

Hey, why not sign up for our email and have this sort of vital reportage sent to your inbox?