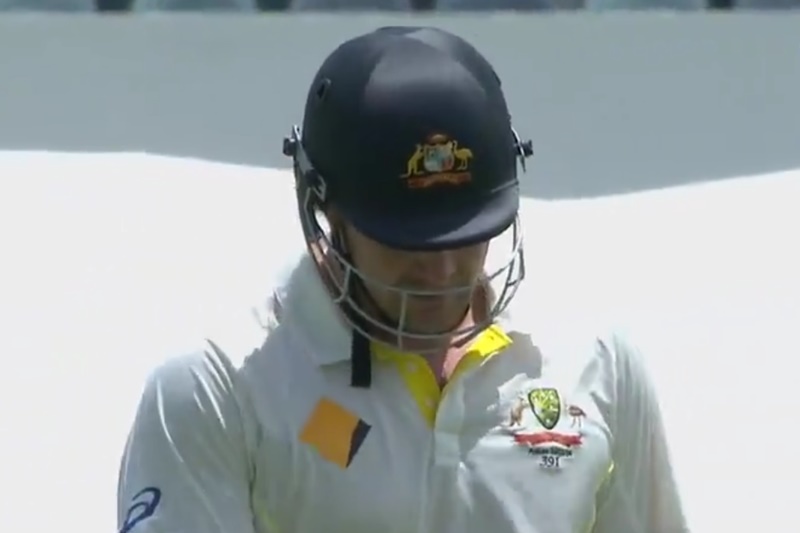 Shane Watson’s run-out for 103 during the Perth Test of the 2013/14 Ashes was one of the all-time great comedy dismissals. This is why.

As an England fan, it’s easy to steer your gaze away from the 2013/14 Ashes. It wasn’t just a defeat, it was an annihilation. And it wasn’t just an annihilation, it was the last rites for what may well prove to be the best England Test team you’ll see in your lifetime.

But can we let you in on a secret? Just because something was almost entirely rubbish, it doesn’t mean that nothing funny happened in it.

Think of the Wicker Man remake. From start to finish, that film is fundamentally an abomination – but at the same time there are so many spectacularly funny moments that we can’t possibly list them all: the needless punches; Nicolas Cage repeatedly enquiring how a doll got burned; that bit where he keeps shouting “not the bees.”

If you look back on it now, the 2013/14 Ashes is a bit like that and Shane Watson’s run-out was a particular highlight.

We don’t usually like to write about stuff we’ve covered in the Ridiculous Ashes podcast, but this is an incident we felt warranted closer attention.

The situation was this.

England were already 2-0 down in the series and about to lose the third Test and the Ashes.

Australia made 385 batting first, largely thanks to Steve Smith’s second Test hundred. Alastair Cook and Mike Carberry then started kind-of-okay in England’s reply before the tourists folded to 251 all out. Tim Bresnan’s 21 ended up the third-highest score.

Australia finished day three on 235-3, already 369 runs ahead, meaning England took to the field on day four about as buoyant as osmium.

What happened next was that Shane Watson made 74 runs off his next 41 balls. This included being caught for six by Bresnan on 90 when the burly seamer leaped like a crested salmon only to land the wrong side of the rope.

Three balls later, James Anderson bowled five wides. A ball after that, Watson tipped one down to fine leg for four to bring up his hundred.

By the end of the over, Australia were 331-4 and England’s wheels were not just off, but elsewhere, at a location unknown, almost certainly fractured into a great many pieces.

At this point, Watson top-edged an absolute steepler off Tim Bresnan.

Look at the image below. That incredibly blurry thing is the ball. It is going pretty much exactly straight up, which is quite the feat really from Watson.

Here’s another angle. Just look at his eyeline. Drink it in.

Impressively, Watson had also hit one precisely straight up in the first Test, so maybe this was a shot he’d been working on.

Anyway, the important point is that it was not a chance that was difficult to get to and it wasn’t an especially difficult chance to take either.

Ian Bell came in, dropped it and immediately turned his back to sulk off.

At this point, Tim Bresnan – completely and utterly furious – picked up the ball and threw down the stumps and in so doing ran out Watson.

What was especially great about this from a TV coverage point of view, is that the wicket took place entirely in the background.

Here’s Bresnan in the act of throwing and also just the very tip of Watson’s bat to indicate his location.

Now here’s the moment immediately after the ball struck the stumps. And let’s just take a minute here to appreciate everything that’s going on in this shot.

Number 1: Shane Watson running off because he’s out

There’s Shane, bottom-right, just in front of the umpire raising his finger. He’s doing that great thing where you’re so obviously run out that you don’t bother stopping, you just keep on going to the pavilion.

Look at the stump out of the ground and the umpire’s finger and look at absolutely nobody celebrating.

Tim Bresnan, in particular, has got a batsman out with a decent piece of fielding and he is just out-and-out livid about that.

Yes, he’s been denied a wicket in his bowling figures – but it’s more than that, isn’t it? It’s a lesson in how illogical you are when you’re miserable. Bresnan has got a wicket, but all he can focus on is how he hadn’t got that wicket half a second earlier.

That’s all he’s really thinking about and you can see it most clearly when he throws the stumps down. It’s probably only 50% a genuine run-out attempt with the other 50% a petulant need to smash something immediately.

Number 3: Ian Bell, entirely oblivious to the dismissal of the batsman he has just failed to dismiss

That’s Bell on the far left, striding away from the scene of his crime, utterly ignorant of the fact his miss was almost instantly negated.

Bell not seeing and Bresnan not caring is what makes this run-out so great for us – and specifically the sheer nonsense of Bresnan being very visibly disappointed at not taking a wicket, even as he was taking that wicket.

It is like a little snapshot of how insensible a cricket team becomes when a Test match is careering away from them and everything is going wrong.

For England, things were so bad that the taking of the wicket didn’t negate the disappointment of failing to take that wicket.