There is a law around these parts, that match reports must not UNDER ANY CIRCUMSTANCES mention the actual cricket. Normally, this presents few problems. Cricket is largely incidental, both to a day at the match and to this website. “About the cricket, but not ABOUT the cricket”, best sums it up.

Day one of the Nottingham Test does not fit this model very well. It’s a bit like doing a report on the aesthetics and structure of Parisian road tunnels on September 1, 1997. And that won’t be the last allusion to a car crash that this report will contain.

Right, down to work. The period of the day before 11 o’clock can’t mention the cricket, because there wasn’t any. This is, unlike the centre of Trent Bridge for the Aussies, safe ground. My day started at about 6:30. I got up, dressed, showered, possibly not in that order, opened the curtains, decided I would bowl, made a cup of tea and went out. At Stockport station a man checked my ticket, told me the platform I needed, and said he would bowl. The lady at the food stand supplied me with a coffee, a breakfast bagel and an unequivocal decision that she would bowl if she won the toss. The train arrived, I took my seat. The man next to me said he would bat. Why do I always end up sitting next to the nutter on trains?

I went to the toilet. There was a sign on the seat telling patrons what they couldn’t flush down the toilet. It was very amusing, but at 12:40 that day I couldn’t help thinking that the joke could be expanded somewhat. 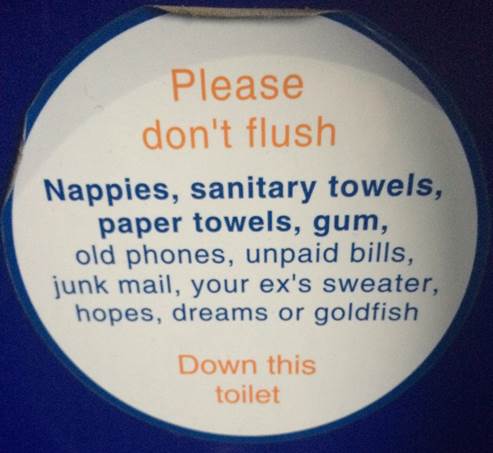 At 11 o’clock a lady came onto the pitch to sing a song. At about five past, the lady stopped singing. She wasn’t fat. I was reminded of this event at 12:40.

We had seats at the very back of the topmost tier of the Radcliffe Road stand. It is an excellent viewpoint, both for the match in front of you and the city behind you. It was very soon after the match started that it all came crashing down. What a mess. What had been quite buoyant was now completely deflated, although I suspect it might have been considerably overblown to start with. Apparently it was blown away by a freak whirlwind. It required some people to pick up the pieces of what was now in absolute tatters. There is some talk that it could be repaired, but looking at it I would say it should be thrown away and replaced by a completely new one. 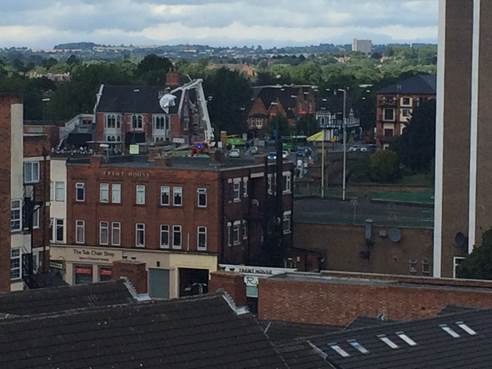 Lunch was very pleasant. Very pleasant indeed. We discussed the regimented rows of yellow-capped Australian fans in the Parr Stand, and decided that the English language needs a word for such precisely arranged misery. Quadrisplatteral was one suggestion, paralleloglum another. Wrecktangle probably had it, though.

Question 1 – What is the chemical symbol for gold?

Question 2 – What BASIC function converts a number into a string?

Question 3 – What word meaning “others” can follow “et” and “inter” to make common Latin phrases?

Question 4 – How many degrees are there in one sixth of a full turn?

Question 5 – What is the first name of the former Vice President of the USA, Mr. Gore?

Question 6 – What word rhyming with “shout” means a yob, a ruffian, a ne’er-do-well?

Question 7 – What is the name for a fence hidden in a ditch?

Question 8 – What is the name for a dozen more fences hidden in a ditch?

This was a lot of fun.

When I got home, it was halftime in the Wigan-Huddersfield SuperLeague match. Huddersfield were winning, but Wigan were able to turn it round and come out eventual winners. That’s the thing about sport – you’re never out of it (yes you are). There is always a chance (no there isn’t). A few words from the coach can transform a team (no they can’t), giving players that little extra they need (are you having a laugh) to find a way to win (there isn’t one). In the final analysis, it’s why we watch it (no it isn’t, we watch it to see Australians trampled into the dust).