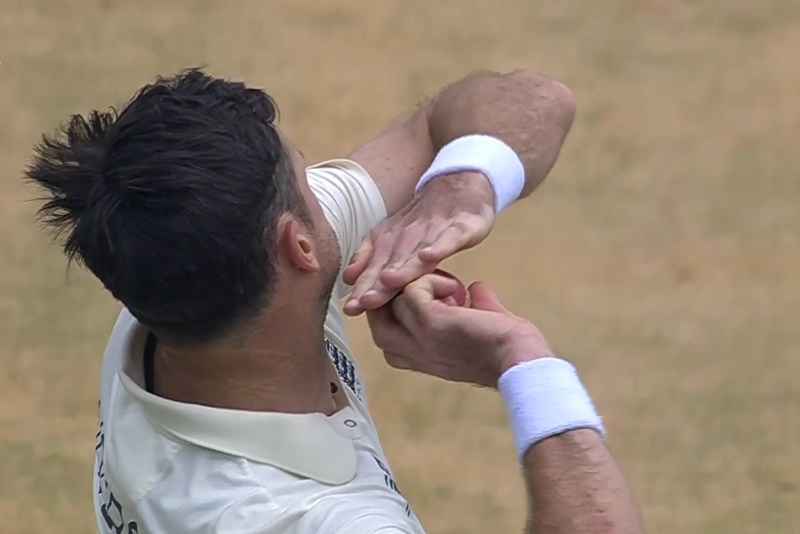 “I didn’t really do anything out of the ordinary,” said Jimmy Anderson about an over that featured one of the finest clean-bowleds you’re ever likely to see, then another one that may or may not have been better, plus an LBW shout that could legitimately have been given sandwiched in between. It’s safe to say Jimmy has his own version of ‘ordinary’ these days.

You could forgive Anderson for going all Dr Manhattan and feeling like he doesn’t have much in common with humanity any more. Maybe he’ll retire after this series and head to Mars on his tod to build a whole new world just for himself.

That possibility is still some way off. For now we have more pressing questions, like which of those two clean bowleds was the better?

Shubman Gill was clean bowled by a reverse swinging delivery for 50.

Ajinkya Rahane was clean bowled by a reverse swinging delivery for 0.

They were really, really similar dismissals. Similar enough that someone stuck them alongside each other in a GIF.

There were two balls in between: one that didn’t swing, which Rahane left; and then one that hit him on the pad that wasn’t given LBW – but which could have been.

As everyone knows, these are the five elements you need to look at in these situations.

All of these things are important.

Let’s not make it too complicated though. Let’s take each element in turn and decide whether the Gill wicket or the Rahane wicket was superior and then tot it all up at the end.

Simple one this. How much did the ball swing? More is obviously better.

Because this is the Gill one…

… and this is the Rahane one.

You could probably get Hawkeye to rule on this one, but we were flicking between two tabs in our browser trying to weigh this up and went slightly mad.

We’ve concluded this is not a hair worth splitting.

The stroke played (and beaten)

‘Bowled’ is the best dismissal because it’s the most unequivocal. That isn’t to say that all bowleds are equal though.

If the batsman edges the ball onto the stumps or is bowled off the pad, that really takes the gloss off.

Similarly, if he has a big yahoo and misses, that’s less good than when he attempts to do nothing more than block the ball and yet completely fails to make contact.

Both of these were fail-to-blocks, so this is another really hard one to call.

This is the shot Gill played…

… and this is the shot Rahane played.

Given the swing, you could probably argue that Rahane is actually the one presenting the full face of the bat.

However, from the viewer’s perspective, there’s something immensely satisfying about Gill’s position, pointing straight at the camera with the stumps spread behind him. That really seems to emphasise the brilliance of the delivery.

The bats of both Gill and Rahane actually came down slightly imperfectly before they reached those positions, but we swear the only nanosecond where it looked like the ball could possibly have avoided making contact with Gill’s bat was the nanosecond when it actually went past. It was almost like the ball had brought a bat-repelling forcefield with it.

This one’s very, very important. Everyone knows the more times a stump cartwheels, the better the dismissal.

Gill’s stump did two complete airborne revolutions before landing on its top. It then fell back towards the stumps, so that’s not quite two-and-a-half spins.

Rahane’s stump did two complete airborne revolutions before landing on its side.

Neither stump bounced and continued on its journey, which was a bit disappointing.

In complete contradiction of what we said at the start of this section, we’re actually going to give this one to the Rahane wicket because it nailed the landing. Even though it didn’t spin quite as much, it finished with a neat lie-down, so it gets points for execution.

Think of Mike Gatting’s “what have I just seen?” reaction to Shane Warne’s Ball of the Century or Virat Kohli’s face after he was bowled by Adil Rashid that time. The batsman’s reaction can really elevate a wicket to a new level.

This is another tricky one to call.

Gill went with “hold the pose” – which is a very excellent way of being out when it looks like you’ve played a perfectly sensible shot.

Rahane went the other way, plumping for, “was that my off stump flying out of the ground?”

This is perhaps even funnier, because what the hell else did he think that ball-on-stump sound might have been?

We feel like you can make a compelling case for both of these and they’re sufficiently different that it’s hard to weigh one against the other.

It was 92-2 for the Gill wicket and he had a half century to his name. Nothing much seemed to be happening in the game and then this happened.

That is quite dramatic.

However, we’re going to argue that context of Rahane’s wicket was better because Anderson had basically told him that he was going to try and bowl him out with the exact delivery he bowled him out with.

Firstly, Rahane had arrived at the crease because Anderson had bowled pretty much exactly that ball to Gill. Rahane knew this was a delivery that could definitely happen because it had literally just happened.

To doubly emphasise that there was danger afoot, Anderson then bowled a big in-swinger that hit Rahane on the pad and could, on another day, have been given out.

With his very next delivery, Anderson bowled Rahane.

Three balls later, bowling to Ajinkya Rahane, he improved on it.

You can get this kind of stuff by email if you want. (The article, not the reverse-swinging clean bowleds).