This was our favourite match this week, largely because Hampshire scored -1 points. They did actually score a point for taking three wickets in Middlesex’s first innings of 467 but were deducted two for bowling too slowly.

Hampshire’s ability to cede ground against the odds was great news for Surrey who arguably put in the performance of the season to engineer a breathtaking defeat to Somerset.

Having taken a 162-run first innings lead after bowling out the home side for 102, Surrey subsequently did everything in their power to lose. Surrey’s match-losing powers are, apparently, phenomenal.

Bowled out for 138 they then permitted Somerset to reach their target of 301 with nine wickets down despite no batsman managing to make more than 56.

This match was more like the classic 2016 first division fare we’ve come to expect – a big fat draw.

We know as a Lancashire supporter that we’re supposed to get really upset when Lancashire lose to Yorkshire because of that whole bitter rivalry thing, but we can never really muster the emotion. The truth is, we quite like Yorkshire – not as much as Lancashire obviously, but easily enough to subdue tears.

This match pretty much confirmed that Yorkshire are the best team around. That might seem like an odd thing to say when their specialist batsmen mustered just 135 runs across two innings, but it’s striking that they still would have won had each of them made a pair.

Yorkshire have a lot of good cricketers. With a bit of batting and a bit of bowling, Adil Rashid and Tim Bresnan all but won this match on their own. Liam Livingstone couldn’t stop them. He made 60 not out in the first innings and now averages 70 in first-class cricket.

Someone somewhere really needs to provide a way for us to embed this. 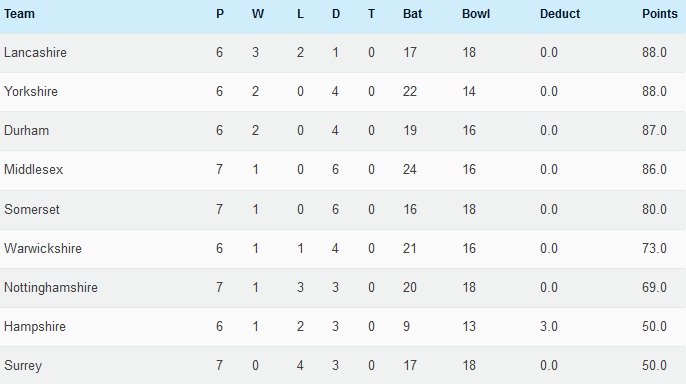