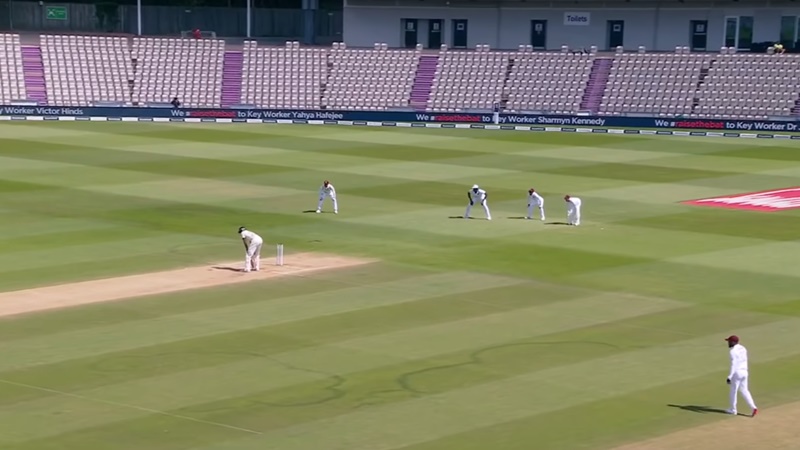 With no fans allowed inside cricket grounds due to the coronavirus crisis, Sky Sports and Test Match Special have been broadcasting fake crowd noise for atmosphere. Could they be doing a better job with this?

Crowd noise is very important in cricket. It’s important for atmosphere, obviously, but it can also help you follow the game. If you’re in the next room, making a brew, a crowd roar can alert you that something significant has just taken place. (At this point we can’t help but reprise our moan about the modern trend for playing replays with all of the original crowd noise. Noisy replays are the bane of our life and have now disappointed or falsely alarmed us somewhere around 10,000 times.)

Ahead of the first Test, we suggested that it would be worth paying attention to what the match sounded like. With no spectators allowed in the ground, both Sky and the BBC played ambient crowd noise in a bid to make the whole thing seem slightly less weird.

On an anticlimactic first day, with the players regularly on and off for bad weather, that ambient crowd hum didn’t seem quite right to us. We felt that they were using “Sunny Sunday” crowd noise when they should have been using “Rainy Wednesday.”

On the Friday, when the sun came out, that same murmur seemed a better fit. But even then it remained the same, no matter what was happening on the pitch. That is not how crowds sound. Even within the same day, a morning session does not sound like an evening session for reasons.

Matthew Share, a freelance Location Sound Mixer who actually pitched for this bizarre audio job, took some time away from Celebrity Gogglebox to talk to us about it.

Matthew thought the audio they used on Test Match Special (TMS) and Sky during the first Test was “pretty okay in the circumstances,” but he felt they could have done more.

“There’s actually quite a lot you can do with recorded ambience of crowd noises,” he explained. “The football uses the EA Sports Fifa audio engine to produce swells of noise for exciting moments and a variety of opprobrium sounds for bad tackles, missed shots and players defecating on the pitch.

“I had a chat with the people at CTV, who broadcast it for Sky, about doing exactly this job for the cricket. I sketched out a rough plan for it that would’ve meant I’d pull together a whole library of recorded ambience, including all the Barmy Army songs and specific sounds for different types of dismissal. I’d then play them into a general hum depending on what session we were in, and what the game was doing.

“It might well have been awful to listen to, but I’d have gotten to go to the cricket and have a laugh at my job so I’m a bit sore they didn’t follow through.”

While it does indeed sound fun, it also seems like an incredibly demanding job for a person to carry out. Watching intently, making decisions and not missing a thing – that’s basically umpiring, isn’t it?

“Yes, it would be quite a full-on job,” agreed Matthew. “I think that’s partly why it didn’t materialise.”

He doesn’t think it’s an impossible task though.

“I like cricket, so the rhythms wouldn’t be beyond me, and if you had a constant track of spectator hubbub underneath all the additional sounds and used subtle changes for the moments of interest, and made sure none of them were too pronounced, I think you could do a good job of it.

“The idea would be to distract from the lack of sound – trainers squeaking, bowlers farting as they release the ball and players clearing their throat on to the outfield – rather than to play every sound that you’d get with a crowd.”

There are many different flavours of crowd noise. It’s fun to think about some of the more specific ones, like ‘hit in the nads’ or the rising crescendo you get when a bowler’s running in on a potential hat-trick ball.

Matthew said: “I had all the Barmy Army songs ready to go, as well as my personal favourite; a slow building, ‘oooooooohhhhh, oh!’ from the crowd that you could use for balls being chased to the boundary.”

There are obvious dangers in being able to trigger ‘sustained cheering’ instead of ‘LBW turned down’. We suggested that the job was almost akin to learning to play an instrument.

“It’s a fairly common way of working for grams operators in theatre and live TV. Remember Tiswas and Vic and Bob using extreme sound fx for comic effect? That was someone sitting in a room with a similar setup.

“The speed of learning the bank of fx is down the individual. It’s not what I do day in, day out but I’ve done it before so I’d have probably been somewhere in the middle.

“I’d have saved the biggest reactions for the wickets of Stokes, a sad sigh for Pope going, a slightly amused cheer for Blackwood.”

Matthew said he got very excited at the prospect of “riding the faders” for a Test match and isn’t giving up yet.

“I’m trying to work out a way of doing all this, and combining it with calling front foot no balls. Basically inventing jobs I can do that take me to the cricket.”