After an excellent breakfast, KC’s dad and I took a ferry to the mainland where we shared a tuk-tuk with an English couple also bound for the match. Security was tight and I had to take a photo to prove my camera was a camera.

It was 45 minutes before the start and we walked up zigzag ramps with the noise level building all the time. On emerging into the magnificent stadium we were assailed by a deafening roar and nothing had happened yet. 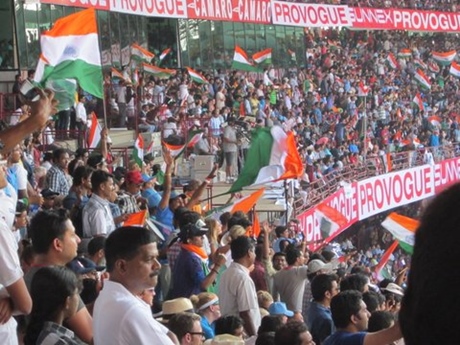 The extensive list of prohibited items had included all musical instruments. Nevertheless, front left of us a man had a huge drum, which he proceeded to play for seven hours. How had he smuggled that in – in his undies? The noise increased with every exciting incident until pain level was achieved.

About half way through the match we started getting texts from friends in the UK who were watching the coverage and had seen me on TV. 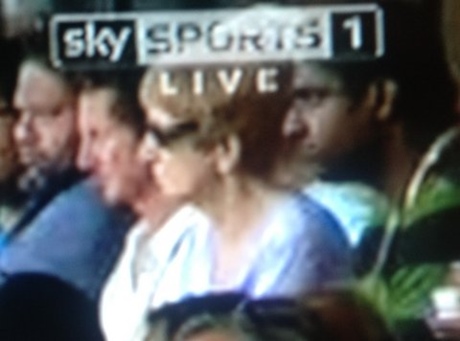 It was very difficult to get any food. The catering staff were overwhelmed both by sheer numbers and the total lack of knowledge of the concept of queueing.

After the match, there was no transport to be had for love nor money. We walked more than a mile in what turned out to be the wrong direction when a knight in shining armour (well, a shiny white 4×4), appeared and offered us a lift. He whisked us in A/C comfort to the ferry jetty, which I am pretty sure was not on his itinerary. So many thanks to George, the cardamom plantation owner.

KC’s dad and I agreed it was the most fantastic and memorable experience and apparently we were not alone. Later we heard KP had said that it was the best atmosphere he had ever played “in front of”. On this occasion it was a blessed relief that the rules here preclude any mention of the cricket.