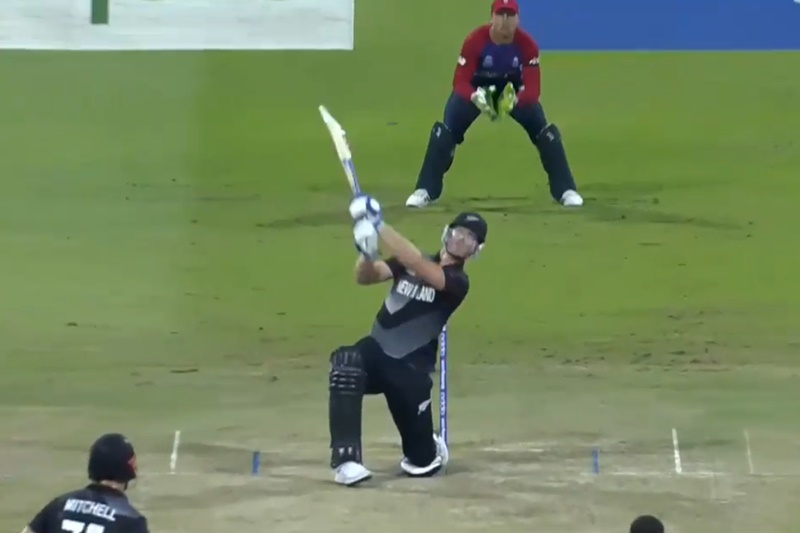 Jimmy Neesham made two excellent and contrasting contributions to New Zealand’s T20 World Cup semi-final win over England. Firstly, he successfully steered the match round the sharpest of corners late in his team’s run-chase. Secondly, he totally neglected to move a muscle come the winning moment. It’s hard to pick a favourite out of the two.

New Zealand needed 60 runs off 30 balls when Liam Livingstone came on to bowl his final over. (‘Runs off balls’ is the correct way to score a T20 run chase. They should use it from the start instead of giving you the target and the overs gone and asking you to make a bunch of calculations to work out what’s required over and over again.)

Livingstone is a weird bowler. You’d call him a bowling option rather than a key member of the attack and he then splits what little bowling he does between off spin and leg spin. Eoin Morgan clearly sees him as a very credible option though, having said ahead of the match that England would have “28 genuine overs on the field.”

Livingstone had taken 1-19 off his first three overs and then continued to defy his supposed weaklinkdom in his fourth. When you need 60 runs off 30 balls and then the odds and sods bowler concedes two and takes another wicket, that’s problematic.

Neesham – who at this point had one run off one ball to his name – then decided it was high time to win the match. When he sliced Adil Rashid to Eoin Morgan just a few minutes later, he had made 27 off 11 balls and New Zealand now needed 20 runs off 12 balls. Dragged along in Neesham’s slipstream, Daryl Mitchell got them in six.

As his team-mates all celebrated wildly, Neesham sat in his folding camping chair with his arms folded.

A little while later, once everyone had cleared off, Neesham remained in his folding camping chair, although he did go so far as to unfold his arms.

We were rather hoping Neesham’s moustache signified an adoption of Victorian values and that his inaction was therefore a sign of stern disapproval for things like ‘having fun’. He has however clarified that it was merely a reflection of his belief that he and his team haven’t yet finished the job, which is a bit more elite sport mindsetty and a lot less fun.