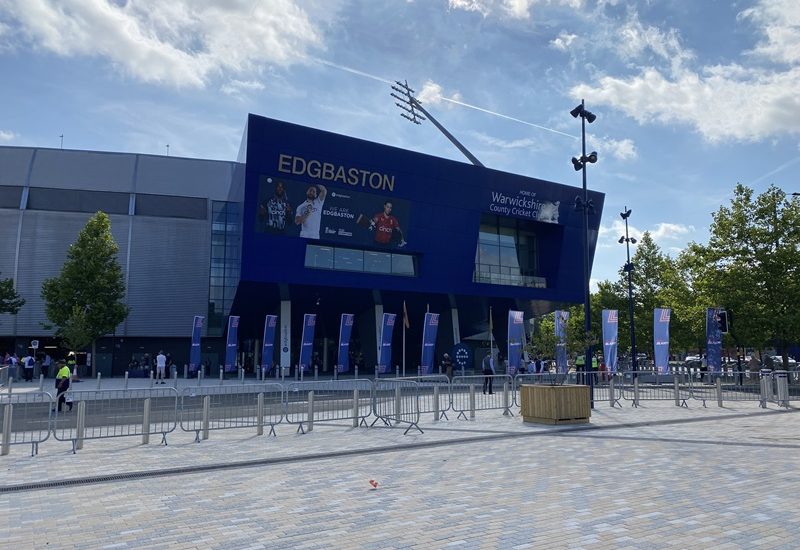 Send your match reports to king@kingcricket.co.uk. We’re only really interested in your own experience, so if it’s a professional match, on no account mention the cricket itself. (But if it’s an amateur match, feel free to go into excruciating detail.)

I travelled up to Birmingham from the West Country, sweating and panting. The heatwave, or excitement about what was to come?

Getting into the ground is often the hardest part. But my accreditation was all in order and I nabbed a spot in the middle of Edgbaston’s big blue media box, right behind the bowler’s arm.

Vithushan Ehantharajah, Matt Roller and John Etheridge were sitting in front of me, almost within touching distance. During the first semi-final George Dobell turned up, larger than life, shaking hands and cracking jokes like everyone’s favourite but slightly scary uncle. I stared gormlessly at him, in the way normal people do when they come face-to-face with the Queen or Paul McCartney.

The mascot race came and went. After opening up an early lead, Lanky the Giraffe got his head stuck in a net and left the way open for Alfred the Gorilla (Gloucestershire, apparently. No, me neither) to pinch first place.

Queuing up for lunch, I said ‘No, after you’ to Ravi Bopara and squeezed past the not inconsiderable figure of Carlos Brathwaite.

Nerves got the better of me and I made the fatal error of choosing roast dinner over vegetarian curry. A free water bottle and reuseable coffee cup eased the pain, along with a weird ‘Vitality Blast’ branded biscuit which I am still not sure was wholly edible.

Eventually I plucked up the courage to say hello to Somerset’s media manager, asking whether there would be interviews if they won. They didn’t win.

Before the final I did a circuit of the ground. A man projectile vomited next to me round the back of the Hollies stand.

What a lovely day.