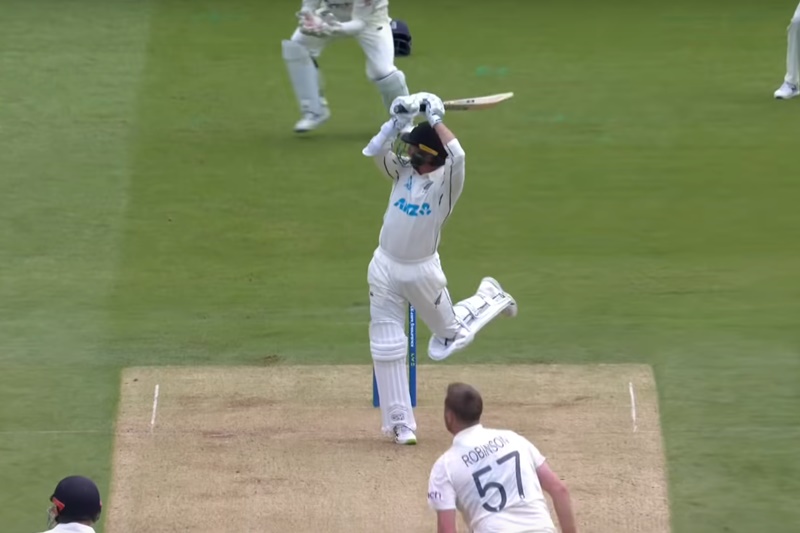 We’re pretty sure we know how this Test will be remembered.

The England team for the first Test averaged less than 273, so it didn’t seem unreasonable that they gave up trying to chase that on the final day against a really very good and balanced bowling attack.

Others disagree, but it seemed a highly sensible draw to us. Rain ruined the game, not England.

It will go down as a paradoxically memorable ‘forgettable draw’ though. Not just for the return of fans after a year of Covid emptiness, but for two striking debuts. Perhaps James Bracey will make his duck memorable with hindsight, but in the immediate aftermath, the performances of Devon Conway and Ollie Robinson feel a little higher profile.

New Zealand debuts are always weird because fans elsewhere in the world have grown reluctant to pay too much attention. It’s not disregard for the country as a cricketing nation that gives rise to this, so much as the fact that they generally only play two-Test series.

All of this is compounded by a level of media interest that is informed by exactly these things.

The upshot is that even after 57 Tests, someone like Tom Latham is still not exactly a household name, even in the kinds of households that talk about cricket a fair bit.

Devon Conway neatly bypassed all this with a sneaky ruse. “If I score 200 in my very first knock when pretty much all of my team-mates fail then people will have to notice me,” he reasoned.

So this is what he did.

When they describe the innings in years to come, they’ll probably say that he reached 200 with a six because that’s a quick and easy thing to say.

But the shot to reach 100 was the striking one. You get one angling down leg when you’re on 98 and it’s crying out for a nudge or a nurdle. Conway figured he’d spin-ping it in the air to the square leg boundary while standing on one leg.

The man who bowled that delivery to Conway was England’s Ollie Robinson who would then bowl him in the second innings. Robinson took 7-101 in the match and New Zealand’s declaration batting did not contribute to that enormously.

It was a performance good enough to encourage selectors to flirt with switching from pencil to pen for writing his name in the future. Except he is now suspended.

This is a complicated one and some elements feel a bit messy and disingenuous.

England and New Zealand had joined in a rather hollow, choreographed ‘moment of unity’ ahead of day one, during which the England team stood wearing T-shirts denouncing discrimination in a bid to express that ‘cricket is a game for everyone’. (Look, it’s a nice and correct sentiment and we know that you’re trying, but the 100% white Test team who were wearing those T-shirts did kinda imply that you could maybe, possibly be doing a tiny bit more in a practical sense.)

Contrasting with this markedly, close of play found Robinson explaining how he was, “embarrassed by the racist and sexist tweets that I posted over eight years ago, which have today become public.”

The tweets are really not nice, but to our eyes they’re not shot-through with hatred and vitriol. They read more like the dumb ‘humour’ of an 18-year-old who’s becoming an adult while communicating almost exclusively with 18-year-olds with equally minimal exposure to the wider world.

We’re pretty confident Robinson will have grown to become rather less of a tit and may even feel that he should not be fully accountable for the excruciating actions of the 18-year-old version of himself. You are responsible though. It’s up to everyone else whether to qualify the opprobrium.

The ECB has not yet qualified it much at all – but it’s worth thinking about why. They sent him out to say sorry in his first England TV interview – which is a tough thing to have to do – and he’s now been indefinitely suspended pending a disciplinary investigation.

This seems a bit grandiose and coming-down-hard-on-this-kind-of-thing at first glance, but this is largely just a reflection of how we view suspensions. He’s not banned. It’s not punishment. They’re trying to work out whether that’s necessary.

Because the ECB definitely need to confirm that Robinson is definitely not racist and sexist. It’s one thing to have historic tweets brought up, but if you slap him on the wrist and then during the next Test everyone finds out that he spends his spare time raiding hotels angrily looking for asylum seekers, they’d cop a fair bit of criticism.

But at the same time we have this weird situation where Robinson’s captain is talking about giving him, “an opportunity to learn and understand he has to do better,” when he’s almost 50% older and has almost certainly already done that.

Proportionality is probably something that will only really materialise once we’re out of the murky waters of doubt.

Anyway. As we said. A memorable debut.

Sign up for our email. (There’s a weekly one if you’re wary of inbox clutter.)