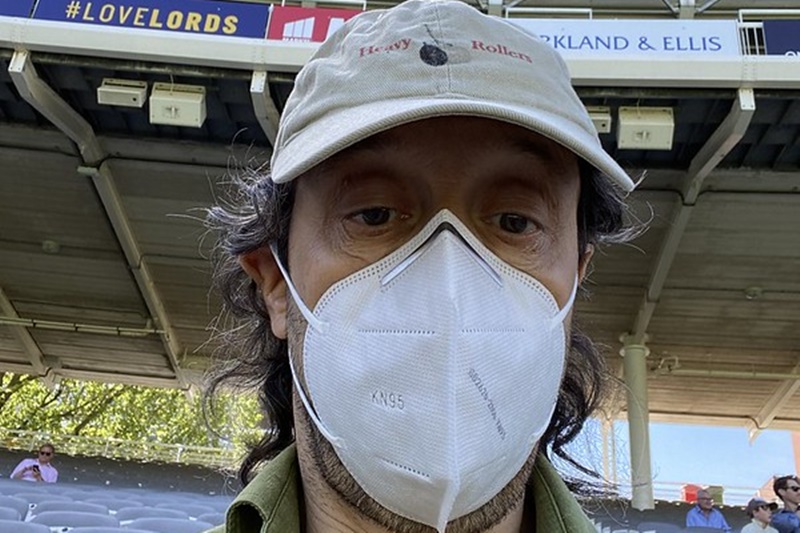 I know I am one of the luckiest Test match spectators in the world; within walking distance of and with ready access to Lord’s. I was among the first spectators to see a Test in England in 2021.

The first Lord’s Test was billed as a MCC members-only affair, with just 25% of the ground available due to Covid. Members normally have a “licence to rove” throughout the members’ areas. This year we had to apply for and then choose a socially-distanced seat, anywhere around the ground, weeks in advance.

I imagined the Mound Stand to be among the least popular stands in the ground for members in these unprecedented “choose a seat” times, so I chose a seat up front in that stand for day one.

Here is a photo of my prepared pile of stuff for the solo outing. The food bag contained a simple picnic of smoked salmon bagel, finger salad, assorted nuts and some fruit.

I was expecting to report to you about a stand populated by disgruntled crusties, in exile from the regular members’ stands, bemoaning the Covid rules that led to their exile. But it turned out that The Mound was so despised by members that many seats there were not taken up, enabling Lord’s to sell a smattering of seats to non-members.

Thus, apart from one friendly MCC member of Kiwi origin, Danny, who had made a similar calculus to me in the matter of location, everyone else within socially-distanced chatting radius was a regular fan who might normally be found in that stand.

A chap called Richard was there with his daughter; both very keen cricket-lovers. A pair of very friendly and increasingly blotto blokes from Hertfordshire, Steve and Simon, were even singing the Jimmy Anderson Song at full, croaky pelt by the end of the day.

…then to Edgbaston for a contrasting vibe.

With any luck, given King Cricket’s publication timetable, the pandemic will be history by the time you read most of my “Live Cricket In The Time of Covid” reports.