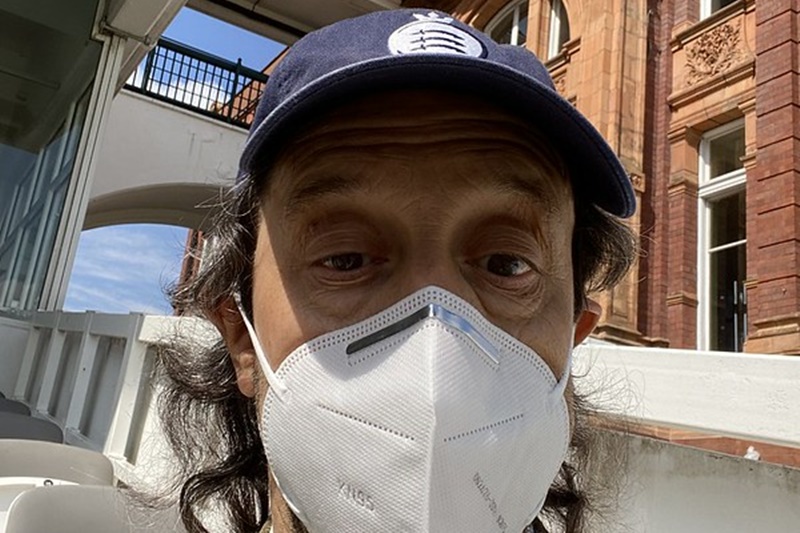 After slumming it in the despised Mound Stand on day one, my odyssey around Lord’s for the first three days of the first post-Covid Test with crowds took me to the Allen Stand.

For this day, I had chosen to sit as near the front as possible beside the Allen Stand gap – i.e. as near to the pavilion as is possible to be without actually being in it.

Before play started, I saw Athers, Wardy and Doully doing their thing. Here’s a picture of them with the despised Mound Stand beyond.

Having expected (but not having found) grumbling crusties in the Mound Stand, I rapidly hit pay dirt in the Allen Stand. A grumpy-sounding Yorkshireman complaining that he likes the view from directly behind the bowler’s arm, but the seat two rows behind me in the Allen was the best he could get.

Unfortunately (or perhaps predictably), he soon softened up as the day went on, turning out to be generally genial and good company – as indeed were all the other members sitting near me.

The Allen Stand is, for county matches, The Middlesex Room, so I know the regular stewards in there quite well. One of them came down to ask me not to push aside the barrier that was blocking the “short cut” in and out of the lower Allen via the gap. The media monopolise the gap during Test matches, she said.

“Wouldn’t even cross my mind,” I said, having seen the paraphernalia in the gap.

“I didn’t think you would,” she said, “but there’s always one, so we have to tell you”.

“Probably more than one,” I said, presciently. Several spectators snuck past the barrier during the day.

I completed reading The Great Romantic: Cricket and the Golden Age of Neville Cardus by Duncan Hamilton, which I shall review for this site. (Spoiler alert: It is a cracking good read.)

I also saw something quite extraordinary in the Allen Stand gap.