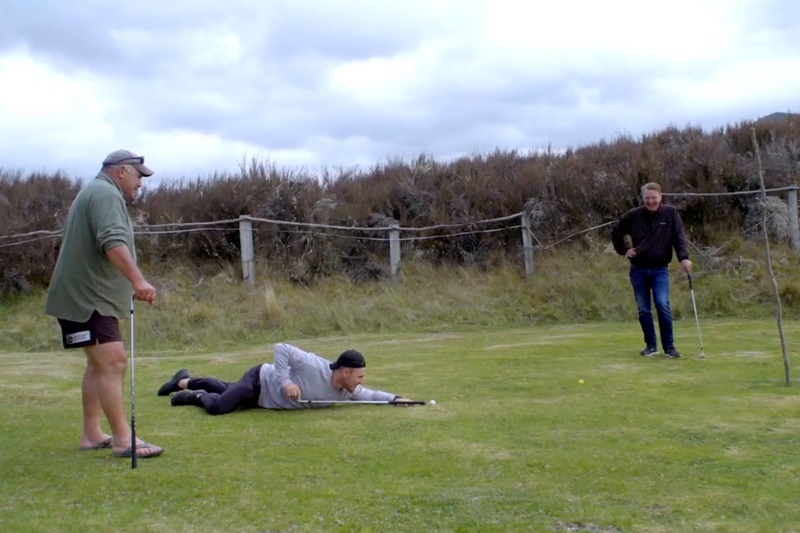 We said we’d report back on This Could Go Anywhere, the Netflix show where Phil Tufnell and Brendon McCullum travel New Zealand playing golf. We watched the first episode last night and we have… uncommonly few thoughts about it, actually.

To recap, the somewhat head-scratching premise of This Could Go Anywhere is that, “Cricketers Brendon ‘Baz’ McCullum and Phil ‘Tuffers’ Tufnell go on an exhilarating road trip to explore New Zealand’s most picturesque golf courses.”

It’s very obvious from the trailer that they do a bunch of other stuff too. We can now reveal that many of these other activities – all the more obviously ‘extreme’ ones, we’re guessing – are forfeits for losing at golf. There are also some rather more sedentary pursuits, which are the things they get up to between watching cricket and playing golf.

Sum it up then

After we’d watched the first episode – which is 45 minutes long (about 50 per cent longer than we expected) – we messaged a friend to make him aware of the programme’s existence.

“Whatever your first question is, it is highly likely the answer will be ‘no idea,” we warned him.

“Are they actually friends?” he asked.

The whole thing leaves us somewhat perplexed, even after watching it.

Tuffers has his Tuffers schtick, where he can have a light-hearted chat with anyone. McCullum is a genial sort of fella and it seems like most people would get along with him fairly easily-yet-unremarkably.

It’s all a bit, “Oh hey, Person-I-Sort-of-Know-a-Bit. Fancy hanging out for a while and having a bit of a laugh?”

So they have fun – but it’s the kind of surface level fun you have when you don’t know someone amazingly well. Other than willingness and availability, it’s not especially clear why it’s these two cricketers fronting this golf travelogue.

But it’s not really golf, is it?

There is actually quite a bit. More than we expected. We know diddly shit about the sport, but to our untrained eye Tuffers’ swing is better than you’d probably expect and McCullum’s is a little bit rustic (although he is a slightly better golfer).

But therein lies our confusion. Why did we watch a golf programme?

It feels like the viewer has to answer yes to an awful lot of disjointed questions for This Could Go Anywhere to not seem slightly confusing.

Do you want to see Phil Tufnell and Brendon McCullum playing golf?

Do you want to see Phil Tufnell and Brendon McCullum roaming New Zealand playing golf, doing forfeits and then filling in the rest of their time doing other holiday activities?

Well, you know, maybe elements of that. Hard to say. Why is this happening again?

We may or may not report on This Could Go Anywhere again, depending on whether we watch more episodes. We’re kind of worried that it’ll be like the Miami Vice film with Colin Farrell and Jamie Foxx where we’ve watched it about three times trying to set our mind at rest by finally working out what they were trying to achieve and what in the name of hell it’s supposed to be.