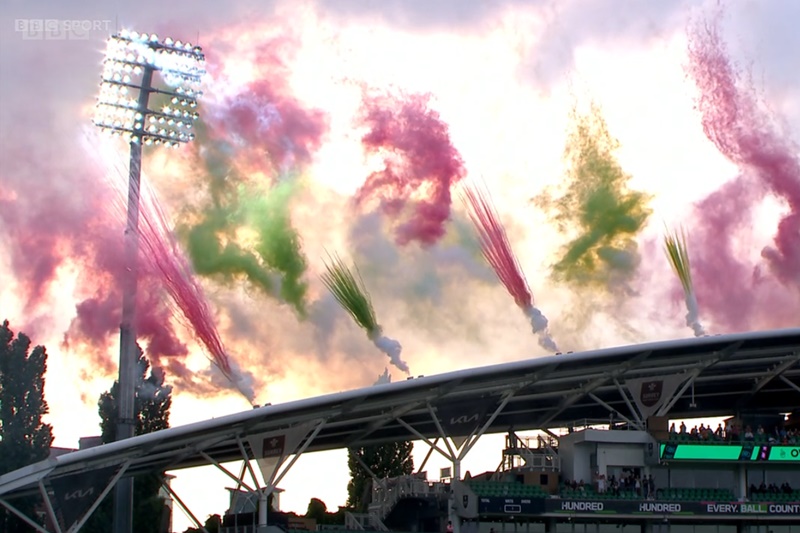 We don’t really want to be an ambassador for the Hundred and nor are we in the #opposethehundred camp. Our natural habitat is the muddy middle ground, taking ineffectual potshots at both sides.

But let’s for now bypass the argument about whether the competition represents the future or death of the game today (it’s neither) and instead highlight a couple of things that may or may not tell us something about the 100-ball format and possibly even the other formats too.

We watched the first match, between the disappointingly-still-accurately-named Oval Invincibles and the Manchester Originals the way Hundred matches are meant to be watched: distractedly.

The matches are scheduled at theoretically family-friendly times. Speaking as someone with a very young family, this is actually rather uplifting to hear, because 6.30pm to 9pm is currently the most frenetic period of the time.

Half-six is almost exactly the time that smaller family members go energetic-mental and this then segues into energetic-and-emotional-mental before ultimately descending into extreme emotional fragility. This means it’s time for bed and then that takes probably an hour and then we make tea.

So, you know, we probably had an opportunity to properly pay attention to the last few balls, but we honestly didn’t have any ability to do so by then.

So, all in all, big tick for the Hundred for indirectly floating the notion that evenings won’t necessarily always be quite like this.

Attracting the attention of kids

As established, our kids are younger than what we presume is the target demographic. All the same, our son, who is one, spent a proportion of the match waving a foam cricket bat around threateningly. Would he have done this if the Hundred weren’t on TV? Quite possibly – but then we can’t rule out the possibility that his sister maybe went and got the bat in the first place after noticing there was cricket on TV.

Was that what happened? Was that the way things unfolded? Who can honestly say they were properly paying attention?

In terms of the impact on our daughter, who is four – she spent a period jumping on the sofa shouting “A Hundred [X]s” a lot, where [X] was any number of different everyday items wholly unrelated to cricket.

Would she have been shouting “20 [X]” if it had been a T20 match? Maybe, although we put it to you that 100 is fundamentally a much more powerful number than 20.

One of the main things we learned during the match was that our main TV is apparently on the wrong picture mode.

The BBC was showing runs on one side of the screen and balls remaining on the other and most of this was off the edge of our screen.

This form of scoring – runs scored/needed versus balls faced/remaining – is the kind of thing that offends some long-standing cricket fans because they are conditioned to seeing runs-hyphen-wickets.

We quite like it though. Wickets are the most valuable currency in Test cricket, but in the 100-ball format they aren’t even going to come into play most of the time. Limited overs cricket is ‘most runs wins’ and in this format the 100-ball duration of an innings – not wickets – is the main threat to scoring as many as you can.

If the BBC need to change anything in their default scoring graphics, it’s to strip away all of the batter, bowler stuff. It is nice to know the batter’s score and the bowler’s figures, but not crucial.

Show those details intermittently, sure, but having them on screen all the time only adds complexity. Pare it back to the essentials. Keep things simple. How many runs are needed? How many balls are to go? Throw in the other stuff as and when you need it.

Mostly things look the same, but we love the Hundred’s bowling cards.

Isn’t that just fundamentally better than displaying things in overs in the shorter formats?

The above is basically what we turn a one-day bowling card into in our head every time we look at one anyway. “6.67 an over – that’s more than a run-a-ball,” we think to ourselves.

And then we look at batting strike-rates and try and work out what 144.56 is in runs-per-over. Batting and bowling stats seem to have evolved independently. Nothing agrees.

We didn’t really hear much of it. We had the sound turned down fairly low so that we didn’t get irritated at trying to hear and then not being able to hear.

It was definitely a less bevvied-up, more family-friendly crowd. We’ve been in cricket crowds that have gone the other way and it can be decidedly not nice. The sport could do with a lot more at this more relaxed end of the spectrum. Seemed like they were pretty into it too – which was by no means guaranteed.

Was it a Hundred crowd though, or was it a women’s match crowd? It’s widely accepted that the latter tend to have shorter queues at the bar than men’s matches. We’ll get more of an idea on this one as the tournament wears on.

Free tickets may have helped shaped things too. Although at least now a precedent has been set.

Well this is not good, is it? The next women’s Hundred match on the BBC doesn’t come until August 10 and even then it’ll only be on the iPlayer. The next one broadcast on normal TV will be the ‘eliminator’ match (you can think of it as a semi-final) on August 20.

The situation with the men’s matches is better, but still not great. The first BBC TV match is tonight (Thursday, 6.30pm, BBC2) and then there’s two more on Saturday and Sunday, both at 2pm.

It’s not exactly ‘appointment to view’ is it? The best place to watch the tournament is in fact Sky Sports Cricket, which you’d have to say is not exactly a channel for people who don’t know much about cricket but who could maybe get into it.

If you like the features we do here at King Cricket and you’d like us to do more of them, please flip us a coin or buy us a pint each month via Patreon. The more we get, the more of this sort of vital reportage we can do. Cheers.