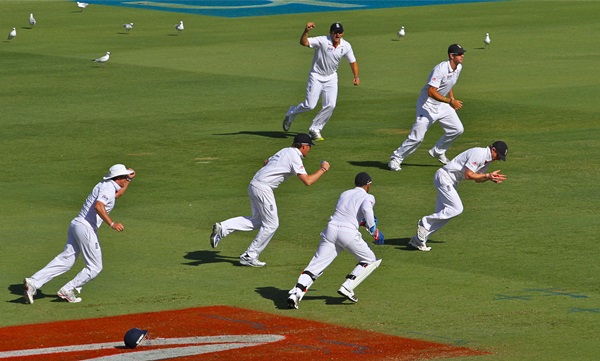 Pit the same two teams against each other in different places or in different weather and you’ll get a different match. This is what makes Test cricket more intriguing than the upside-down picture of a crow with human legs in our local pub.

With such breadth comes varying levels of entertainment though. Efforts should be made to ensure Tests are played in different conditions to ensure that variety persists but some types of matches are quite simply more exciting than others. Sri Lanka v India at the Sinhalese Sports Club Ground in 2010 was an example of a poor Test. Good players, skilled cricket, but when both teams declare, something has gone awry (okay, India didn’t actually declare, but it was hardly because they were skittled).

Compare that Test to the low-scoring thriller played out between Pakistan and Australia at Headingley a week before. That’s the kind of cricket that grabs us by the nostril hairs and yanks them repeatedly. It was impossible to ignore.

Test attendances throughout the world are poor but a lot of Tests are poor too. Where run scoring is high, excitement is often low.

Perhaps some fundamental confusion has been brought about by one-day cricket and Twenty20. In these formats runs are all that’s needed for victory. You certainly need runs in a Test, but wickets are the meaningful currency. If wickets aren’t falling in the longest format, you’re not actually getting any nearer a result and the whole spectator experience hinges on that.

Declarations remain too common. In our opinion, a Test match should be about how many runs a team can score, not how many a team chooses to score. With swing and seam in that Pakistan v Australia Headingley match, runs suddenly had more value. Rather than being methodically amassed and stockpiled, they were sought out like a valuable commodity. Singles mattered, twos were vital and boundaries were priceless. With runs worth more, field settings were more important. Most importantly of all, bowlers were a source of entertainment, rather than mere conveyor belts bearing sustenance for the batsmen.

When every aspect of the game has greater meaning, the viewing experience is intensified.

The value of a run

In that match, pretty much every ball was worth watching. You didn’t just think: “Partnership building here. I’ll pop out for a few hours and see if a wicket’s fallen when I get back.” If you went out at some point during Pakistan v Australia, you could have missed a match-winning, counterattacking hundred partnership or a whole innings. The game would have moved on. You’d have actually missed something.

An innings of 500 is not five times as exciting as one of 100. A target’s a target, so in reality they’re equally exciting. You could argue that a corollary of this is that each run is only one fifth as exciting in the high scoring match because it’s only one fifth as important. If Test cricket pitches were consistently made a little more challenging for batsmen, maybe people would be five times as interested in each day’s play.

That’s a ludicrous statement, of course – but might there not be a sufficient rise in public interest to make up for the likely loss of a great many fifth days? What’s so great about day five anyway? A Test never ends in a draw on any of the first four days.

This post is an updated version of an article which first appeared on the website of what was then The Wisden Cricketer in July 2010. It has since been deleted, which is why we’re republishing it here.