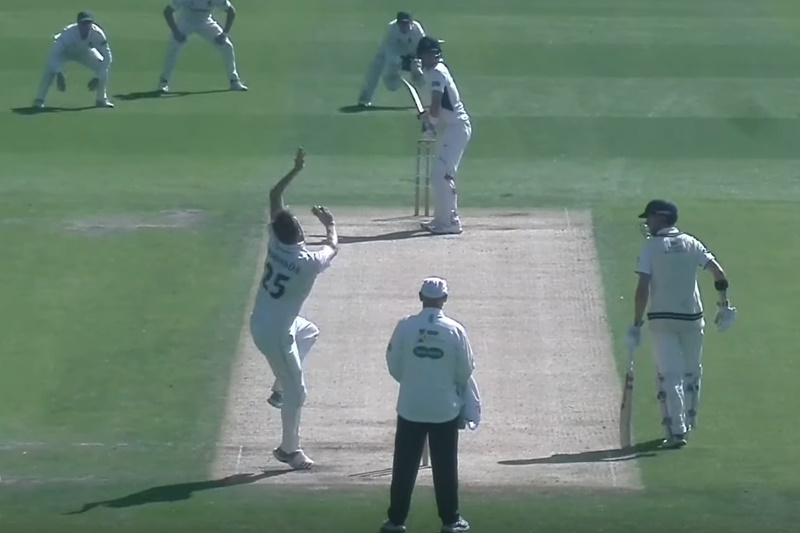 Test cricket is back. Even if it’s a last minute two-Test series that even the boards who arranged it seem a bit nonplussed about, Test cricket is a wonderful and important thing – and never more so than to those who are making their debuts.

The general astonishment that England have managed to get so far down their long list of wicketkeepers that James Bracey is actually going to play a game for them diminishes the significance of his debut a touch. We’re interested to see what nickname he earns (the smart money’s on ‘Brace’) but the real point of interest in this New Zealand series is surely Ollie Robinson.

Robinson’s story probably already qualifies as ‘frequently repeated’. He is from a cricket family. His dad played for England over-50s, his mum has sufficient expertise to be nicknamed Richie Benaud and his mum’s husband is Paul Farbrace, who you no doubt recall from the putting together of a World Cup winning England team and also various post-play interviews after England Test batting collapses.

Because of Farbrace (and also because he was good at cricket), Robinson wound up at Yorkshire as a teenager. After much overnight driving to Kent to see his friends, he got sacked. Then he went out a lot for a few months. Then he got bored. Then he hired out a leisure centre and practised with his dad. Then he became the best tall seam bowler in county cricket.

We’ve kind of whistled through a bit of that being as he’s 27 now. But that’s the gist. Like Haseeb Hameed, he’s bounced back.

Robinson is an exciting prospect for an England fan for several reasons. Firstly, and most obviously, there is his first-class record, which is nuts: 279 wickets at 21.04 – and that average still seems to be coming down.

Then there is how he goes about taking those wickets. Robinson is famously not averse to revision. Jason Gillespie, his former Sussex coach – and a man who knows plenty about the taking of wickets – calls him, “comfortably the most researched fast bowler I have come across.”

He’s also 6ft 5in. That’s not freakish for a quick bowler, but it definitely puts him in ‘tall bowler’ territory and that’s a type of bowler teams generally want. (New Zealand will have the even-more-sizeable Kyle Jamieson in their team.)

England are freely admitting to Ashes monomania already, so they’ll see Robinson’s as a highly significant debut because increasing the height of the bowling attack is always a priority ahead of any tour Down Under.

The first warm-up match that tour was billed as a bowl-off between the three. In the first innings they managed 0-88 (Tremlett), 1-92 (Rankin) and 1-123 (Finn) and they all went at over four an over (Finn went at over five).

Tremlett took 1-35 in the second innings and 0-23 in the next tour match and this was enough to earn him selection for the first Test.

Now a great many things didn’t go brilliantly in that series but the absence of a viable tall seamer did contribute to Australia setting England over 500 to win in each of the first three Tests. So let’s see how Robinson fares. There’s also the small matter of all these other Test matches to try and win in the meantime.