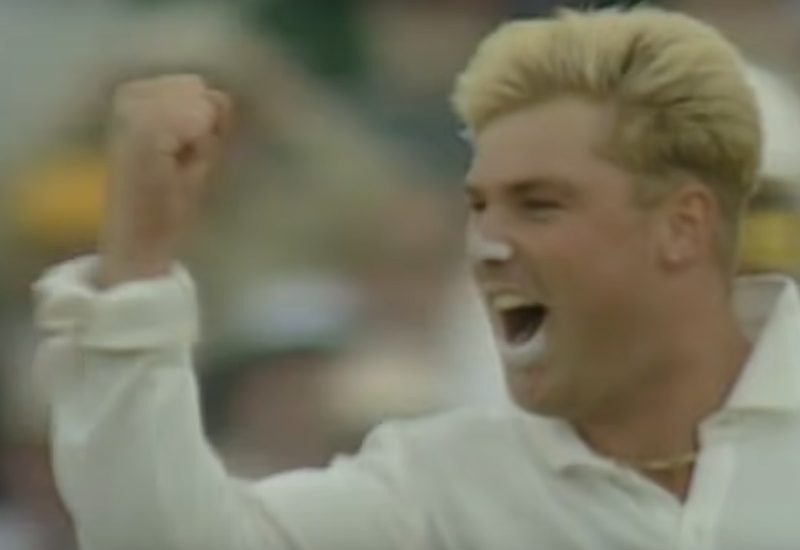 No man is an island and no team is either. The team you support is only part of the equation. Opponents elevate a match. Opponents like Shane Warne.

We’re not really going to get into that. What we want to talk about is the impact that had. How it made him just about the most exciting cricketer there’s ever been, even when – in fact especially when – you weren’t on his side.

When you’re watching cricket, the excitement you feel comes not from what will happen, but from what might happen.

We remember a T20 match from 2009 when South Africa’s Graeme Smith and Loots Bosman put on 170 in 13 overs against an England attack that couldn’t find a way of preventing them from slamming sixes over cow corner.

It was incredible hitting and among the least exciting passages of play we’ve ever seen. The only uncertainties were just how many sixes they’d hit between them (15) and whether one or the other might eventually get caught in the outfield. (Smith was eventually caught at long on, Bosman at deep midwicket.)

Conversely, Shane Warne’s whole modus operandi hinged on broadening possibilities such that you started thinking that anything could happen.

Warne said he always used to try and really rip a leg break when he first came on to bowl. This wasn’t to try and dismiss the batsman – although sometimes it did – it was really just to sow a seed of doubt. He wanted to maximise the range of what his opponent thought was possible. The bigger the difference between a big leg-break and a straight one, the harder it is to know how to play.

Put yourself in the batter’s position. If what at first looks like the same delivery could eventually arrive either here or *all the way over there* then that’s kind of tricky to counter. How do you make your initial movements when you most likely have two entirely different shots in mind?

Throw in the outside possibility of a googly or some other most-likely-fictional delivery you’ve heard rumours about and the possibilities become greater and shot selection harder still.

We wrote about this last year after England were annihilated in a pink ball Test in Ahmedabad. It’s funny to read that back now. What does it say about Warne that the best way of explaining the perils of a two-day Test were to liken it to how he went about his business in every game? The lethal skid in that match? It was basically Warne’s flipper, wasn’t it?

Warne was great during the 2005 Ashes, but we’ll come to that in a bit because that’s only a fragment of the point we want to make here.

There’s a widespread misconception that the 2005 Ashes began on July 21, 2005 at Lord’s. People tend to look back on the series as comprising the on-field events that took place between then and September 12 at the Oval. This is completely incorrect. And now we’re going to tell you why.

For most England fans, the 2005 Ashes began in 1993 because that’s when we met our first character. That’s where the story begins. It was a pretty tidy opening scene for a drama too because it really got the audience’s attention.

A young, blond leg-spinner stands at the end of his mark. We are told that he is significant by the newspapers and the commentators, but we don’t just instantly accept that. It’s something we need to judge for ourselves.

Our first impression is that he looks kind of pudgy. He is fidgeting with the ball and awaiting his moment. When that moment comes, it at first seems underwhelming.

The blond young man basically just walks in. In years to come, this will become drama in itself, but for now it’s just a walk. There is a quick trot and then he releases the ball. The delivery looks like it’s going down the leg-side and then swerves even further that way, like a wayward in-swinger. It’s a ropey loosener from some nobody who we’ll all have forgotten about within a year.

It is not. At the moment the ball pitches, magic happens. The furiously spinning ball grips and corners impossibly, redirecting itself towards the stumps. The swerve that had looked like compounding an existing problem is in fact a strength, drawing the batter – England’s Mike Gatting – down the wrong line. The ball evades his bat and pecks the bail on the cheek as it passes by, unseating it from the stumps. Suddenly there’s only one sad, pudgy cricketer on display and it isn’t Shane Keith Warne.

It will take many years to appreciate even half of the richness, depth and complexity of this new character and that – plain and simple – is why no other sport can offer anything to match the cast of a cricket match. It’s not the tabloid stings and the bad behaviour. It’s not even the skills necessarily – although clearly they’re mandatory. It’s the fact that the long hours of a Test career allow you to get to know people and learn how they react in different situations.

If you follow cricket, caricatures become three-dimensional people. As well as their strengths and weaknesses, you get a feeling for what will inspire them. You can spot when they’re nervous. You can sense when they’re desperate. You know them. You have technicolour heroes and villains of equally searing clarity. Both contribute to the excitement of a match.

When we played conkers as a child, the winning conker accumulated all the points of the defeated conker. Similarly, England’s 2005 Ashes team didn’t just beat Australia. They beat one of the greatest Australia teams of all time; a team that had been routinely humiliating them since 1989.

They play the Ashes every five goddamn minutes these days, but they won’t get another opportunity to get close to the 2005 series until one side or the other has first spent 16 years getting stomped on by one of the greatest cricket teams ever assembled.

England beat a whole squadron of supervillains in 2005 and Shane Warne was the greatest of them all.

Because it wasn’t even like he was cut down when they were finally beaten. If anything he added further lustre to his reputation, displaying a will and ability to compete even when things weren’t going his team’s way. Playing in those Australia sides, these were qualities he’d rarely had an opportunity to display and they were qualities that many of his storied team-mates struggled to unearth.

Warne had always had a preternatural ability to redirect cricket matches. Now we saw more clearly that this was allied to the sheer delusion of always believing he could do so, no matter what the circumstances.

He did this the bat, turning 137-7 at Edgbaston in pursuit of 282 into 220-8. In so doing, he contributed to what will probably always remain our ultimate benchmark for sporting excitement.

More significantly, he did it with the ball too, most notably with his 4-31 in the second innings at Trent Bridge.

This was Warne in his purest form, delivering a performance that was nothing to do with the pitch and not all that much to do with the deliveries he bowled either. It was all about smothering a batting line-up through sheer force of will.

England had made 477 in their first innings and were chasing just 129 to win and yet somehow that target became utterly mountainous.

To provide further context, Australia had just made 387 following on. The pitch was unarguably decent – Warne himself had just made 45 off 42 balls. But he paralysed the batters. Paralysed the nation, in fact. If you watch the footage of Steve Harmison waiting to bat, thinking the entire Ashes is going to hang on his batting ability, you see a pretty good representation of how every England fan was feeling.

It was hell. But in time you realise that without that hell, the catharsis of victory just isn’t the same.

That is what a good opponent can do. Shane Warne was the best opponent.

You can find our other features here. They’re basically funded by our Patreon backers. Their contributions buy us the time to write them – they wouldn’t happen otherwise. If you’d like to chip in a quid a month or whatever to help us do more features, you can find more details here.

Or, if you’re a new reader, why not sign up for the email first to get a feel for what this site’s about.