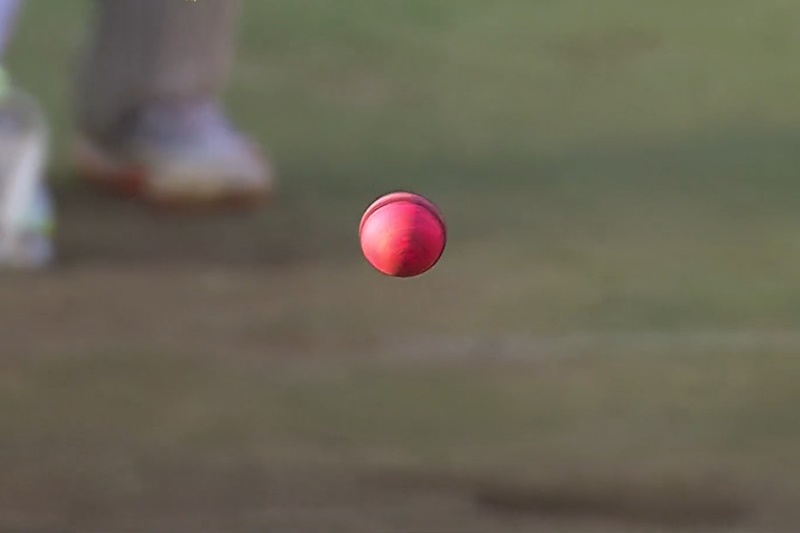 Shane Warne said he always used to try and really rip a leg break when he first came on to bowl. This wasn’t to try and dismiss the batsman – although sometimes it did – it was really just to sow a seed of doubt. Warne wanted to maximise the range of what his opponent thought was possible.

This is what sharp spin does. It expands possibilities.

Some people say you only need to turn the ball the width of the bat to find the edge. This is sort of true. But there’s a ceiling to how threatening you can be if that’s the maximum deviation you can muster.

Facing a bowler who turns the ball ‘just enough’, the batsman will probably feel pretty confident in his choice of shot whether the ball turns or goes straight.

Conversely, if what at first looks like the same delivery could arrive at the batsman here or *all the way over there* then the same batsman is most likely making his initial movements with two entirely different shots in mind.

Throw in a googly or some other kind of delivery that spins the other way and you increase the range of possibilities further. Suddenly the batsman is half-playing three shots as the ball travels from the bowler’s hand.

That’s when batsmen start looking like idiots and that’s why wrist spin is great.

The amount the ball turns increases the range of possibilities. But that’s just one variable. Deliveries can also arrive at different speeds.

To a very great extent, speed comes from the hand. But as with turn or late swing, much of the danger comes with changes in pace as the ball pitches – particularly if there is a lot of variation.

Batsmen are like drummers. We don’t just mean that their job is hitting things. They’re also very rhythmical creatures.

When a batsman is ‘in’ and seeing it like some sort of ball that is famously larger than a cricket ball, a large part of the apparent ease of batting is because they’ve found a rhythm. After facing a lot of deliveries, they get a very precise feel for how long it will take for the ball to arrive at them after pitching and their body starts to work to this time signature.

Speaking after the two-day day-night Test in Ahmedabad, Joe Root said he felt that the thick shiny lacquer on the pink ball had been a more significant thing than the pitch.

“I honestly think the ball was a big factor in this wicket – the fact the plastic coating, the hardness of the seam compared to the red SG meant it gathered pace off the wicket,” he said.

“If it hit the shiny side and didn’t hit the seam it almost gathered [speed]. A lot of those wickets on both sides, the LBW and bowleds, were due to being done for pace beaten on the inside.

“If you look at some of the replays, batsmen probably ended up in the right position but because it was gathering pace off the wicket it was difficult.

“Credit to Axar [Patel] in particular – I think he exploited that really well and found a very good method on that surface.”

What Root is basically saying here is that even if the pitch were true and spun consistently, the ball resulted in unmanageable variation.

Two deliveries that looked the same – and which may even have been bowled in the same way – could arrive at the batsman completely differently. One would arrive early and straight and the other would arrive much later and wider.

There are things a batsman can do to try and mitigate that, and – as Root said – there are also ways to bowl where you can better exploit that. As such, you can argue it’s still a fair contest between the two teams.

There is no real route to success for batsmen though. By playing a different way the odds can be shifted from terrible to bad, but they can’t really be improved much above that.

That would seem a valid criticism of using a highly lacquered pink ball on a pitch offering good turn – that for even a good batsman, it’s a puzzle with no real solution.