The Test world is a baffling place right now. There’s more uncertainty than when the cat finds himself equidistant from some food and an open door.

India’s batsmen collapsed. Are they old? Are Australia’s young bowlers really good? Or did the pitch deteriorate? After all, Australia collapsed too. Then again, they often do at the minute, most notably against South Africa – although that’s hardly surprising because the Saffers have such a strong pace attack.

Or do they? Pitches there have been greener than a seasick parrot in recent times, but the bowlers haven’t outdone their opposite numbers. South Africa drew 1-1 with Australia and are currently 1-1 with Sri Lanka as well. Maybe it’s the batting that’s letting them down. Maybe it isn’t.

Sri Lanka themselves were comfortably beaten by Pakistan. Most people concluded that Sri Lanka were struggling, but maybe Pakistan are amazing.

The good news is that Sri Lanka play another Test in South Africa, while India will play three more Tests in Australia, which should help clarify some of this.

That bloody two-Test series between South Africa and Australia is where all this uncertainty came from. It raised questions and answered none. In cat terms, it added a comfy bed to the food-and-open-door situation, leaving us in a pain-faced, miaowing, triangular limbo.

Another Test, another Australian batting collapse

It was only just over a month ago when South Africa were given the most memorable of lessons by Australia. In being dismissed for 96, South Africa thought they’d set the standard when it came to batting collapses, only to see their opponents proudly stumble to a score of 47 all out in response.

Seemingly unaware of Australia’s predilection for buckling as easily as a child’s belt, India chanced their arm on the third day of the Boxing Day Test at the MCG, falling from 214-2 to 282 all out. “Less of that,” said the Aussies and promptly self-detonated, losing their first four wickets for 27 runs.

It was the kind of stirring stuff that brings a tear to the eye. David Warner’s ugly flail and inside edge onto his stumps seemed like it would be a high point until Shaun Marsh did the exact same thing. There’s a certain nobility in that; a suicidal conviction akin to dashing your own brains out on a tree even when there are quicker, less painful options available to you.

India won’t be doing that again. Don’t mess with the best when it comes to batting collapses.

Suppose we should write about at least one of the Boxing Day Tests. Australia v India is the more interesting one from an impartial perspective and so far India have the upper hand thanks to Zaheer Khan and some old bastard fifties.

One of those was from Sachin Tendulkar, who apparently ‘fell short of his hundredth hundred’. Few people aren’t willing him to get to three figures before too long, if only because the whole ‘falling short’ thing is getting so tedious. It detracts from a decent innings and a decent delivery from Peter Siddle that did for him.

The way it’s going Tendulkar will be ‘falling short’ of a hundred when he’s bowled for three or even when he’s sitting at home on his settee, not playing a match. Theres a risk that he might start to claim he’s falling short when attempting all sorts of other things as well. He’ll tell the missus he’s fallen short of unloading the dishwasher and she’ll pat him on the back for making a great effort, even though all he was doing was lying in bed reading his Viz annual.

Tortoise Dravid will doubtless overtake Hare Sachin tomorrow morning to become India’s top scorer. Ed Cowan top-scored for Australia and Jarrod Kimber’s put some words together in an interesting order at Cricinfo on that subject. It’s an article that says a bit of something about being a cricket fan, hints at how hard it is to make a Test debut and boasts a beautiful closing line. We heartily recommend it.

We couldn’t remember whether we did anything on the site for Christmas. Turns out we don’t. The closest we’ve come is wishing everyone a happy Boxing Day Test Eve.

The Boxing Day Test is a great tradition. There are a great many things that make cricket better than other sports and this is certainly one of them. For Australians and South Africans, good weather and time off work combine to make this a time of optimism and levity. What better way to enhance this than with a Test match? It doesn’t matter if you’re not in the ground – repeatedly abandoning the barbecue because you’ve heard a wicket fall on the TV inside is one of life’s great pleasures.

For Brits, Christmas is a time of pessimism and trying to drink through the emotional pain barrier. Here too the Boxing Day Test serves a valuable service. Firstly, it’s something to look forward to at the end of Christmas Day. Secondly, it’s a reminder that the seasons cycle and cricket will be back soon enough.

Also, this Boxing Day is the first anniversary of The Day. We will forever be thankful for that.

A short story about cricket

We’ve written an episodic short story about taking rational decisions based on empirical evidence. You’d think that every cricket writer would be jumping on that crowd-pleasing bandwagon, but weirdly they’re not. Short stories about sports administration are in worryingly short supply during this year’s festive period. It’s inexplicable.

Mark Butcher with scissors and a cup of tea

Not at the same time – that would be MENTAL.

Here he is with the scissors: 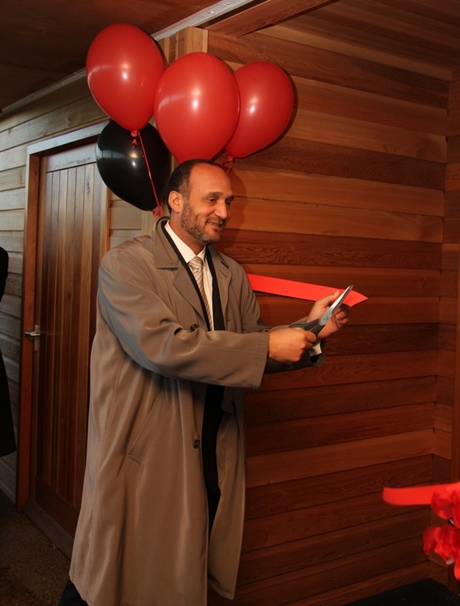 And here he is with a cup of tea: 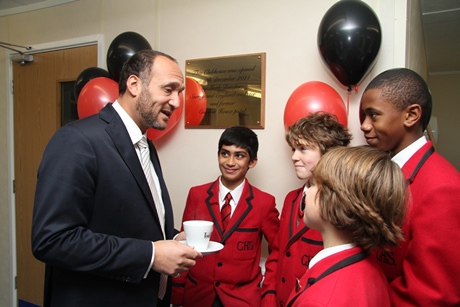 If you’re wondering what’s going on here, our correspondent said that Mark was at “some sort of thing”.

We told you Australia had bottomed out. Logic has penetrated their camp and infected a handful of people. We’re worried it might spread.

First of all, Ed Cowan comes into the side (or “Cricket With Balls’ own Eddie Cowan” as Jarrod would have us refer to him). He replaces Phillip Hughes, meaning Australia have added a batsman to their team. Cowan’s season has therefore been as successful as his book about last season

. This contrasts sharply with the man we always thought would be opening for Australia around this point in time.

Phil Jaques has only played two matches for New South Wales this season. Triple back surgery rather stalled his career and he’s never really got back to playing how he once did. Even worse, he’s now suffered the ignominy of having hit an eye-catching fifty in the Big Bash. And he’ll be turning out for Yorkshire next year, the poor sod.

Another with back problems is Shaun Marsh. He returns to the Australia squad as well, which is eminently sensible, because Shaun Marsh is ace. They are talking about not picking him however, which is reassuring. Maybe someone will develop an antidote to logic that can be used before too many people are afflicted.

A reliable and organised Pakistan cricket team is essentially just a theoretical construct. Nevertheless, Misbah-ul-Haq has got them about as close as they ever get.

In recent months, they’ve reached a state of solidity they rarely experience. They’re scoring runs, they’re taking wickets and they’re winning pretty much all of their matches. The first Test defeat in the West Indies is their only real blemish since the World Cup and if they haven’t played the toughest opposition, there’s also the fact that the opposition has little impact on win/loss ratios for Pakistan – they seem perfectly happy to beat South Africa and then lose to the Faroe Islands under-11s in their next match.

Nothing scares the other Test nations quite like the rare occasions when Pakistan’s chickens retain their heads and stand still for a bit. They know that were Pakistan to stop deliberately quaffing poison for even just five minutes then no side could even hope to compete with them.

Most Test teams would struggle were they unable to play any home fixtures and all of them would consider the incarceration of their two best players a catastrophe. These things are but pebbles under the wheels of the Pakistan monster truck. How long before that monster truck attempts to drive straight up a waterfall?

Gordon Greenidge at Lord’s in 1984

Gordon Greenidge is always worth writing about and his 214 not out in the fourth innings at Lord’s in 1984 deserves better treatment than we’ve given it over at Cricinfo.

Stu and Ash are going to take a break for a while now and we’re going to do something a bit different with our next few pieces at Cricinfo. We’re going to try something a little more subtle. The provisional title is Captain Maximum and his Six-Hitting Marketing Machine of Misery.

It’s not called that. It’s so subtle we can’t even come up with a sensible name for it if we’re honest. It’s actually possible that we’re confusing ‘subtle’ with ‘insipid’. Guess we’ll find out if it gets rejected or via the comments if it does get approved.

The deflation of Sri Lanka

A lot of the life seems to have gone out of Sri Lanka since Murali’s retirement. On the face of it, the team’s much the same, but there’s a wrinkling and lack of solidity about them. They’re like yesterday’s balloon.

They haven’t shown much heart according to Russell Arnold. Maybe that’s because they haven’t been paid. A fair day’s wage for a fair day’s work. Anything else saps the will a bit, no matter what other motivations you might have.

So where worse to play than South Africa, where dismissals are pleasingly frequent these days? All out for 180 isn’t even particularly shameful by current trends over there. It’s not good, but we’ve seen worse and South Africa aren’t threatening a giant lead.

When we say ‘giant lead’ we mean how many runs more than Sri Lanka they’ll score. We don’t mean an oversized leash for Will Jefferson.