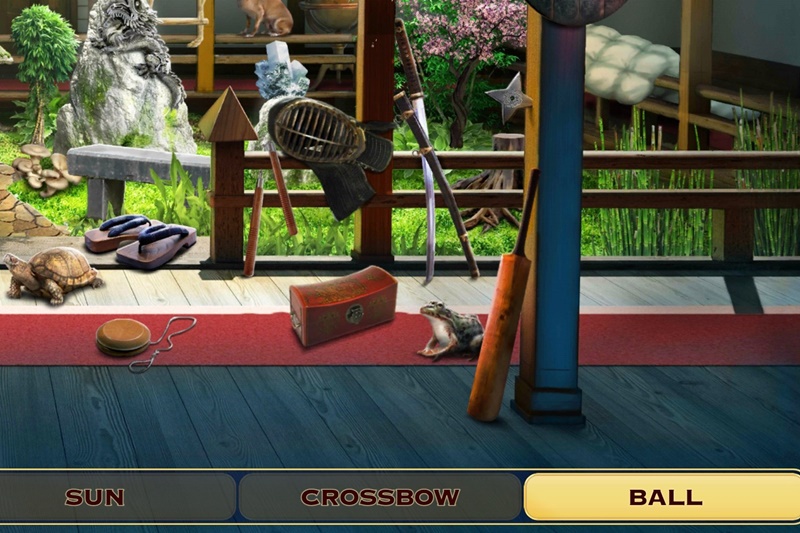 Jayne with a Y spotted this cricket bat in the Pearl’s Peril hidden object game. “The ridiculous English language description is ‘fungo bat’ (a baseball term),” she said.

Jayne said: “There are a few more complications, but essentially you find hidden (and not so hidden) objects in scenes to earn in game ‘stuff’ and that allows you reveal a pretty lame plot.

“Monetization via in-app purchases is pretty aggressive, but once you’ve figured things out you can play at a decent clip without spending actual cash. There are tons of languages, and the translations can be a bit iffy – ham came up as jamón (Spanish) once.

“Along the way you’ll have to know (or learn) what things like a kota and a hamsa are. They get loudspeaker/tannoy, bullhorn and megaphone mixed up. And they’ve just put a cricket bat in a Japanese garden – but then again they put snakes in Hawai’i and THERE ARE NO SNAKES IN HAWAI’I.”

If you want to get more of a feel for the game, Jayne points out that pissed-off Pearl, “looks a right bitch.”

And these rude rock formations.

“And to balance the cute llama there is a creepy AF clown.”

In no way exposing our slow speed in publishing these things, Jayne got back to us three months later to inform us there’d been another cricket bat, “and I think it was called that.”