Having not been to Sophia Gardens before, I was a little unsure what to expect. However, having been to international matches before, I knew that I would be at least £60 less well off before I started.

Nevertheless, we got in, only to find out they can’t serve until 10am. There was a man with a watch there to enforce it.

We made the mistake of going to the first bar we found: Foster’s or Strongbow. I wanted something vaguely resembling beer, so cans of John Smith’s it was.

We mooched around the ground and found bars that sold a better standard of drink (more fool us).

We came across the team playing 5-a-side. That clearly meant a late start – not that anyone bothered to announce it.

A glance at the Guardian site informed me that the toss was delayed because of the rain. Why do you need to delay a toss? It went ahead shortly and Australia elected to bowl – as you would unless your surname was Hussain or Ponting.

I avoided the food because it was ridiculous – right up until I seriously had to eat. I bought a hot dog which was a shade under the £6 everything else was. It was just about edible.

A man had an odd shirt on who sat on the steps. 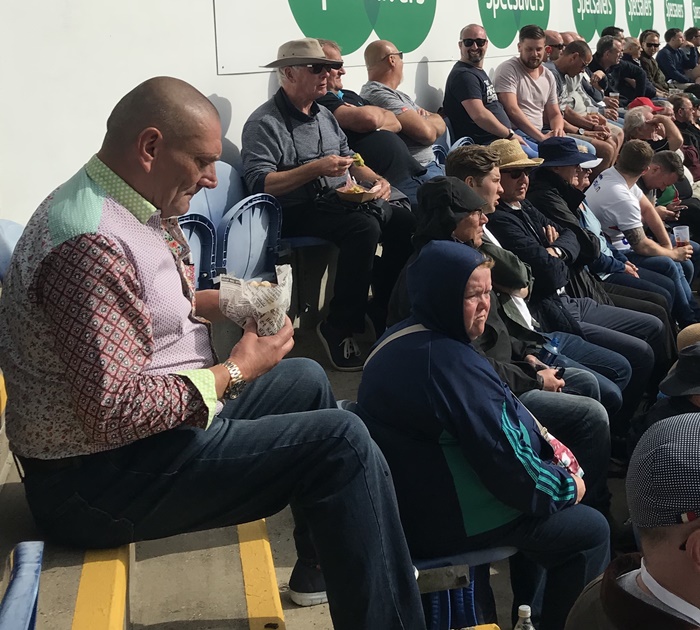 We won with plenty to spare and so back we went to our conveniently located hotel.

I had to go to Brussels the next day so other than a couple of pints round Cardiff, hoping to run into Gladstone Small, Mike Gatting or anyone, I called it a night.