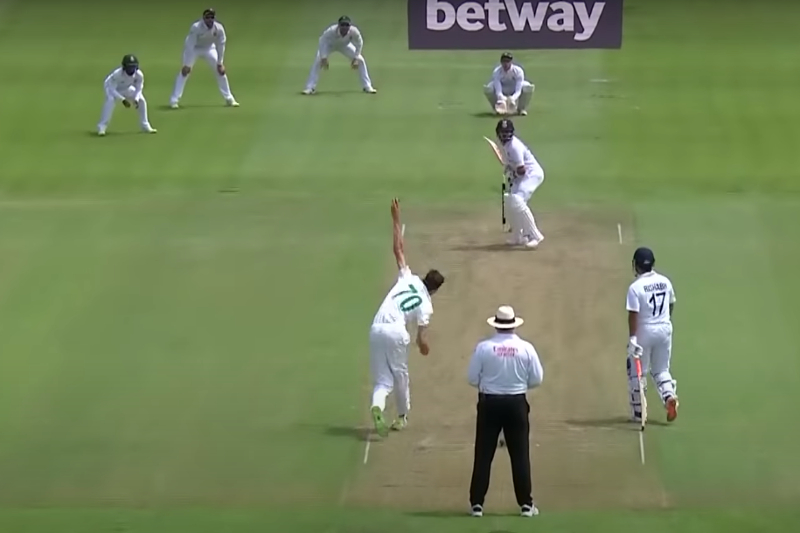 South Africa v India has been an excellent series that has thrown up some really significant talking points. King Cricket being King Cricket we’d instead like to focus on one of the insignificant ones: Marco Jansen and how awkward he looks.

If you’ve not been paying attention, Jansen is South Africa’s new bowling all-rounder. He is 21 years old and 2.06m tall.

Given that the man who comes in to bat two places ahead of him, Temba Bavuma, is 1.62m tall, we are likely to see a lot of Dads v Lads type imagery in coming years, like that photo of Will Jefferson and James Taylor that gave rise to this drawing and also this one.

Jansen is not just tall. He is officially a ganglatron; a person who can look ungainly and uncomfortable even when performing tasks at which he is adept.

This is most evident when he bats.

Five fifties in 21 first-class matches isn’t exactly breath-taking, but Jansen apparently started out as a batter and South Africa think enough of him that he’s been coming in at eight.

But visually… visually, his batting game has the fraught, giraffe-limbed quality of Stuart Broad.

As we’re sure you’re aware, Broad is our favourite batter and a large part of the appeal is the fact he can alternate between beautiful and impossibly hideous from ball to ball. His back-foot drives can be as languid as they come, but then next ball he’ll transmogrify into an uncoordinated octopus and somehow trip over his own arms.

It’s early days, but Jansen hints at being able to approach both extremes. He also does the same trying-to-get-lower squat as the bowler runs in.

Unlike tall batters, tall bowlers are far less likely to look awkward. This is in large part because such a large number of them are massive. We see tall bowlers all the time. It’s normal. Being tall is very helpful for a bowler.

Jansen, however, looks less like a bowler who benefits from his height and more like a man who bowls because of his height.

This is kind of unfair, because we’ve watched Jansen’s action in slow motion quite a bit and all the main body parts appear to be in their correct places at the key moments. It’s just that Morne Morkel thing: you watch him bowl and somehow or other it just feels like there’s a few extra elbows in the mix.

Sign up for the King Cricket email if you’re worried you might miss future analysis of ‘ghost elbows’.