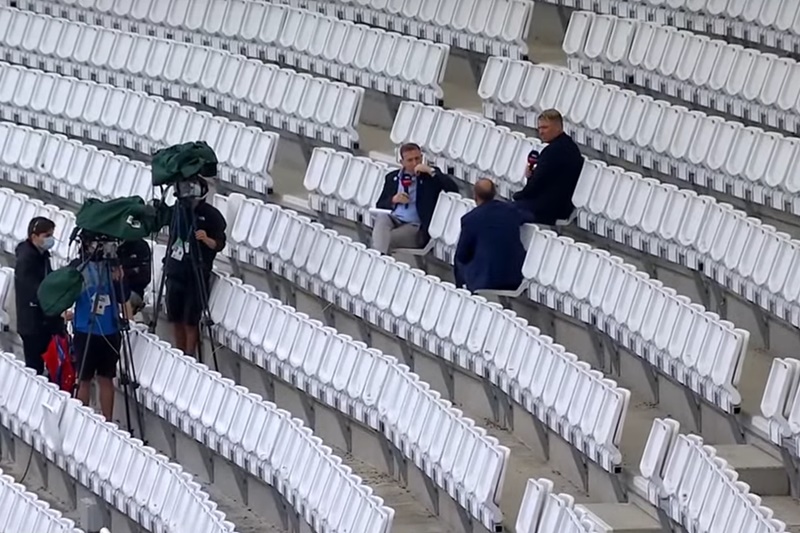 There’s a phenomenon this summer where bad weather is tailing the England cricket team as it bounces between Manchester and Southampton.

We are near the former and whenever there hasn’t been cricket, the harsh Mancunian sun has been baking the turf to concrete. We are currently experiencing – and really, there is no other word for it – perfect weather. Conversely, at the Whatever-You’re-Supposed-To-Call-It Bowl in Hampshire, it appears to be autumn.

We have every confidence the scenario will reverse for the T20 internationals at Old Trafford later in the month because that’s the way things have been going. We actually have a theory that one of the England players is a rain god, like Rob McKenna.

As well as being massively annoying, the ongoing inclement weather has also raised some important questions about safety.

Midway through day two, Sky Sports did a whole big thing about captaincy with Mike Atherton, Nasser Hussain and Shane Warne. The rain which had stopped play had relented, but it was still very murky, and yet the three of them sat outside in the stand where any one of them could have easily sustained a fearful blow in the substandard light conditions.

As a measure of how dark it was, look at poor Shane crinkling his plasticised face into an actual squint in a forlorn bid to make anything out.

And look at poor Nasser who clearly had *no idea* that he had blindly grabbed and donned a shirt, V-necked jumper and blazer combination.

You have to remember that the cameras enhance the light. In those conditions Nasser was grimly oblivious to his absolute car crash attire.

And then look at Athers.

Athers had notes on actual 20th Century paper, instead of a phone or tablet or whatever.

That means his words weren’t illuminated. What if in trying to read them in the grim light, he’d accidentally said “Pricky Ponting” or “Alastair Cock”? He’d have been out of a job, wouldn’t he?

Is it really fair to force Michael Atherton to try and read players’ names in wholly unsatisfactory light?

He was also holding a pen, which could definitely have had someone’s massively-dilated eye out.

It’s all well and good trying to entertain the fans, but should commentators really be asked to face difficult questions about persuading Andrew Flintoff to take fielding practice seriously when their safety is genuinely at risk?