India are three wickets down in no time on a pitch that’s nastier than Satan when his haemorrhoids are playing up.
Dhoni: “Yeaaaaah. I’ll probably just stick around for 30 overs or so before basically just mincing the ball wherever I please when we get within touching distance of our target.”

Mahendra Dhoni is set upon by two thugs wielding knives.
Dhoni: “Yeaaaaah. I’m just going to take these knives off you, if that’s okay. Now off you go. Bye.”

This is what you can achieve when you’ve harnessed the power of the mind.

Not top hats and rabbits magic – the good kind.

Shakib Al Hasan took 1-24 against Zimbabwe today. Then he hit 105 not out off 69 balls by way of an encore. Almost imperceptibly, he’s becoming a top all-rounder and Bangladesh’s first superstar.

He was even named Test player of the year by The Wisden Cricketer this month, which is quite an accolade. It says something that the article starts “Who is Shakib Al Hasan?” even though it’s a full three-and-a-half years since we said he was mint.

We’re pretty certain that we can justifiably claim to be ahead of the curve on this one, which makes up for mobile phones and Seinfeld

– both of which we were about eight years late on.

Mahendra Dhoni strolls back into town

Just the other day we were wondering whether any of Mahendra Dhoni’s millions of fans had actually noticed that he doesn’t really obliterate the bowling any more.

Despite the fact that he scores far more runs now, we wondered whether he was largely buoyed by residual love from when he batted with blisteringly effective bat-spinning might.

Yesterday, Dhoni set off in nurdle mode before eventually engaging the long handle. The result was 124 off 107 balls and two textbook one-day innings in one.

It must be a constant battle for Dhoni to subdue his inner beast. Our inner beast sleeps a lot because it’s basically given up on life.

Recovered England captain, Michael Vaughan, is being interviewed tomorrow (Thursday) and you may be able to have your question put to him if you comment here.

We would ask him to conjugate a verb and then watch him fall at the first-person hurdle.

Then we would ask him the one question that we always ask people: if you could have an additional body part taken from another animal, what would you have and why?

There are people who only read this site for the comments. That’s fair enough. Really the posts are just pegs to hang the comments off. Sometimes we’re tempted to just put up a title on its own as that’s all that’s really needed.

However, what you, the reader, often miss out on are the late comments on old posts. We had a classic yesterday on a cricket bat invading a rival sport. It was quite possibly spam, but we don’t care.

i have a big dick so play cricket snooker with my dick (dick snooker).

by the way im baldy.

We were impressed by the first line, but it’s the addition of that throwaway second line that elevates this comment to a truly spectacular level.

England’s next generation of Test players

How are the next generation of England cricketers going to get the experience they need now that the Home Office has brought in legislation that targets Kolpak players?

How will young South Africans get the necessary experience of English conditions to help them earn their place in the Test side? How will they even qualify for the national side if it’s going to be made so difficult for counties to sign them in the first place?

Nobody’s thought this through.

We saw an article titled ‘Anderson wants to captain England’ and we immediately thought: ‘He’ll be lucky’.

We thought this for the exact same reasons that Anderson himself thought it:

“As a fast bowler and from the North, I suppose I’m very unlikely to get a look in.”

This is painfully true. There is a hierarchy of suitability for the position of England captain. If you can’t find someone who fits your first choice description, you move down to the next best. It runs like this:

In reality, England never make it anywhere near the bottom of that list, so there might be a few other possibilities in there too. Anderson is probably less likely to be made England captain than Graeme Swann’s left batting pad, but he may just about rank above Matt Prior’s jockstrap.

Perennially sulky, team-mate-slapping off-spinner, Harbhajan Singh, played some demented shots in hitting 49 off 31 balls in a heroic but doomed bid to win the first one-day international against Australia. Praveen Kumar was a handy sidekick, hitting 40 not out off 32. Harbhajan enjoys batting against Australia.

If you’re due to bat at the lofty heights of number eight, you need to be half decent these days. In fact, you have to be half decent to bat at nine (like Kumar). In this same match, Australia had Mitchell Johnson at eight and Brett Lee at nine. Even England have a go at this with Stuart Broad and Graeme Swann occupying those batting slots of late.

However, the king of the lower order is surely Daniel Vettori, whose Test batting average at number eight is 42.64 with three hundreds. 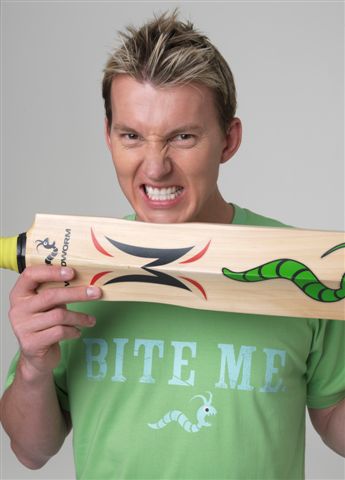 Lee hit 48 off 31 balls, which went a long way towards helping New South Wales win the Champions League Twenty20. He took a couple of wickets too.

We’re not sure that ‘wanting him in Australia’s Test side’ is really acceptable, so we’re not going to tell you that’s how we feel. It will be a guilty secret which can nestle alongside ‘we fried and ate some chicken skin the other day’.

By all accounts the New Zealand players liked Andy Moles, who’s just resigned from his position as their coach. However, being liked isn’t really the whole job.

It was fairly obvious that Moles was going to have to go after Daniel Vettori was asked whether the New Zealand players were happy for him to continue as coach.

Considering Vettori’s a nice bloke who’s generally quite diplomatic, this is tantamount to a slap to the face. When you consider that Vettori said it while accepting an award during an awards dinner where he actually sat at the same table as Moles, it’s maybe more of a ro-sham-bo.