Probably Shaun Tait, Brett Lee and Stuart Clark – but being as they’re all out of the reckoning one way or another, which bowlers will Australia pick for Perth?

Having made a point of undermining Ben Hilfenhaus, Mitchell Johnson and Nathan Hauritz by dropping them, these players are sure to return. That seems to be the way the Aussie selectors are working at the minute.

Would that be harsh on Dough Bollinger who’s only been back for one Test? 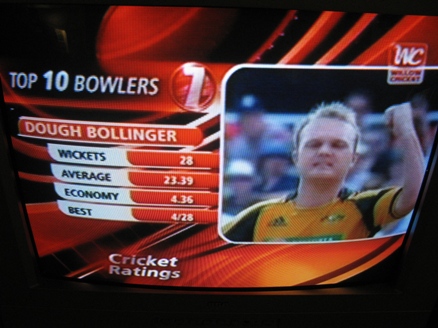 (Thanks to Curt in Houston, Texas for spotting the above on Willow Cricket.)

It would certainly be harsh on Xavier Doherty as he’s Australia’s second-highest wicket-taker in this series. He has three wickets.

Averaging a wicket an innings, Australia would only need 10 bowlers if they could find a few more as effective as Doherty.