England finally found a modicum of limited overs success. They’ve analysed the stats and apparently scoring hundreds and making big totals will give them a better chance of success in the World Cup. Common sense might also tell you such a thing.

Joe Root became the first England batsman to survive spin bowling in the middle overs. He made a hundred, allowing the the lower order to do what they’ve always been perfectly capable of.

Eoin Morgan remembered that he wasn’t terrible at cricket while the selectors remembered that Ravi Bopara played cricket. Even more strikingly, Virat Kohli finally passed 50 and totally vindicated being retained in our All Out Cricket fantasy team for the entire summer.

And here are the final standings for the King Cricket one-day mini league. Bailout won. We apparently didn’t come second, but sixth. 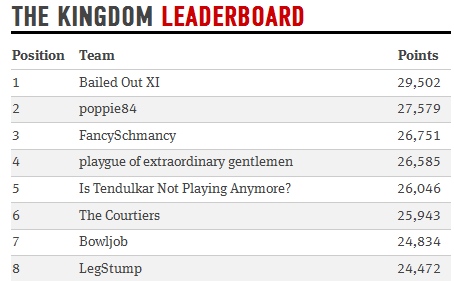