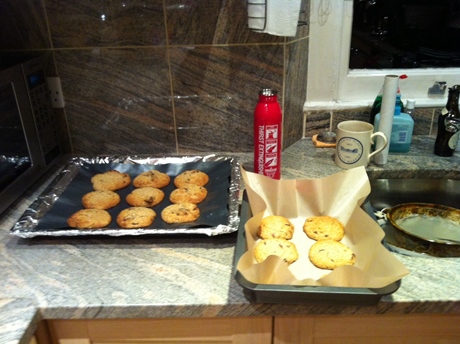 Click here for the story of how the Lord’s throdkin came to be created.

Sauté bacon with a dash of virgin olive oil and a little fresh thyme until the bacon is well-browned but not frazzled.  Add ¼ cup of the resulting bacon fat to the butter. Cut bacon into large-sultana-sized pieces and reserve.

Beat the butter/bacon fat, sugar and maple syrup in a mixing bowl until fluffy, ideally using a food mixer.  Then gently mix in the egg.

In a separate bowl, mix the flour, baking powder and cinnamon together.  Stir the flour mixture in with the butter mixture.  Then gradually stir in the oats and bacon, roughly 1/3rd of a cup at a time.  Then cover the dough and refrigerate for at least an hour.

Preheat the oven to 190 centigrade (375 Fahrenheit) and thoroughly grease some baking sheets.

Scoop about 1/3rd cup of dough per cookie, roll into balls and place the balls at least 3 inches apart on the baking sheets.  Flatten the balls slightly, e.g. with a dampened fork.

Bake for 10 to 12 minutes until golden brown.  Allow to cool on the baking sheets for 5 minutes, then finish cooling on racks.