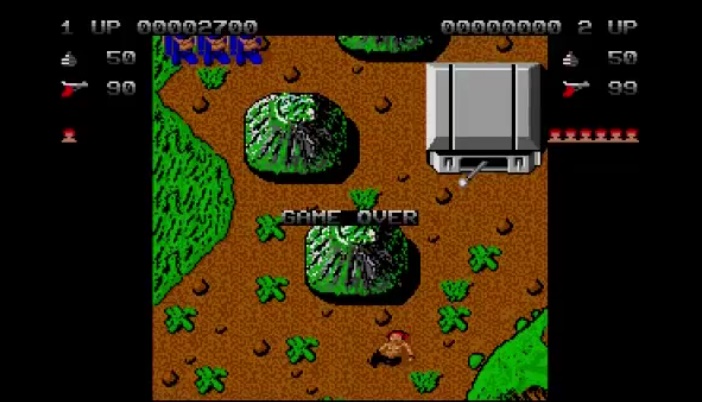 We first played Ikari Warriors on the Commodore 64. The enemies were (apparently) Neo-Nazis and the aim of the game was to defeat them in online debate.

No it wasn’t. You had to shoot them all.

Ikari Warriors was also released on the Commodore Amiga and we thought this was the version we’d played more extensively a few years later, but having looked into it just now, we don’t think that was the case.

Jack Beanstalk Video used to sell games for 99p. They weren’t mainstream titles. They were old games and shit games and other stuff that for one reason or another fell through the cracks. The games were branded, but came with minimal packaging and no instructions (which was unusual back then).

We suppose that blatant rip-offs would probably have been another category within the 99p cardboard box and we  suspect that what we remember as Ikari Warriors was actually Vihari Warriors or something like that. Or maybe they just tweaked it and released an Ikari Warriors Special Edition and no-one really noticed because they only ever sold one copy from an obscure shop in the North-West of England called Jack Beanstalk Video.

Whatever it was called, the crucial difference from the original Ikari Warriors was that you had to choose your weapons before you began and your selections had consequences. (This is the real thrust of this piece and why we’ve spent 300 words gabbling on about archaic computer games.)

The obvious temptation on the weapon selection screen was to pick a mini gun, which sprayed a million bullets and also had a long range. This was great for the first few feet of scrolling, but then you’d run out of ammo. No worries – in two-player mode Player Two could choose a less spectacular kind of machine gun and pick up the slack until Player One could find some more.

But then a little further on, you’d come across a tank or a gun emplacement or a turret or something and suddenly realise that you needed grenades. This kind of thing happened again and again until eventually you twigged that there would always come a point where the very obviously destructive and easy-to-use weapons let you down. If you wanted to make real progress, you needed to cover all bases because you never knew what was round the corner (a totally inappropriate term because of course there were no corners).

A smart and successful two-player team would always pick complementary weaponry and try and cover all eventualities. We’re sure you get what we mean by this.