On arrival at the Frangipani Tree, we couldn’t help but notice the cricket bats and stumps mixed in with tennis equipment and swimming gear. “Oh yes”, we are told, “the staff are always up for a late afternoon game of cricket if any of the guests request it”. “Where do they play?” asked Daisy. “Over there.” A vague wave of the hand indicated the direction of the tennis court and several villas.

The next day was the start of the World Cup. We requested a game of garden cricket and the staff seemed delighted. There was another English family around and they expected that the young man of that family, Chris, would also be up for a game. He was. “Do you play?” I asked him. “A bit,” he said, which turned out to mean, “a hell of a bit more than you, Ged Ladd”.

The field of play was a little unusual. One side of the tennis court was basically the pitch. You could only score in front of the wicket. A villa provided significant fielding cover from square leg through midwicket and you were allowed only one run if the ball failed to clear that villa, six if you cleared it. 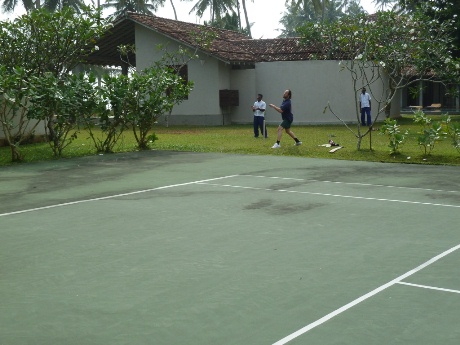 Clearing the villa required a near-perfect combination of direction, upward trajectory and some power. The straight “V” was relatively normal, apart from the tree hazards, with the swimming pool making a very natural boundary. Apart from the net of the tennis court, the off-side was pretty hazard-free, with the perimeter wall of the resort designating the boundary.

The playing conditions were also a little unusual. Five players a side. Eight overs per team. Eight8, I’m thinking of calling it. It’s a terrific marketing idea, because it eliminates those rather dull, formulaic overs between over 4 and over 17 that seem to me to be blighting conventional cricket these days.

Chris and I opened the batting for our team with a respectable stand of 40-odd, of which I contributed about 15. The pitch had tennis-ball bounce, which makes sense really, considering that the pitch was a tennis court and the ball was a tennis ball.

It did make it possible for me to time and place my shots for once in my life. I mostly placed them in the direction of Daisy, who was playing for the oppo (once she put her camera down), as you needed to go aerial to avoid the hazards but also needed to avoid getting caught.

Our team managed 89-3 in our eight overs, which seemed like plenty until the oppo’s secret weapon, a big left-handed waiter named Sanjay, demonstrated the use of an asymmetric field designed to force off-side shots for right-handers but which allowed full-heaves to leg for the left-hander. Daisy scored a run off my bowling, which I’m still hearing about.