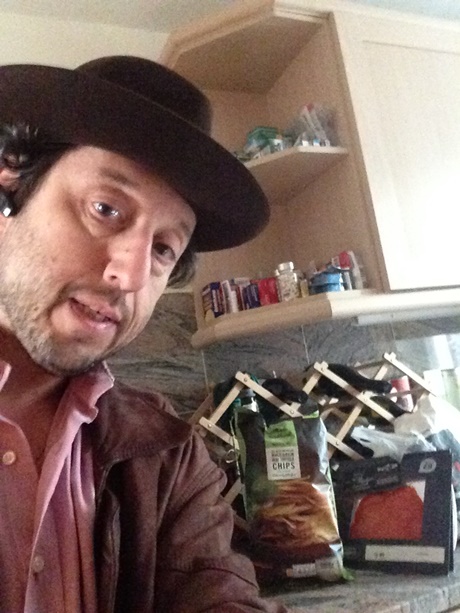 It was a strange, bittersweet day, 10 April 2015. I woke up looking forward to buying in provisions ahead of Monday, which was to be my first day of cricket of the year – a traditional early season visit to Lord’s with Charley The Gent Malloy. Indeed, this year the tradition continues even down to the same two teams at play. But soon after rising, I learnt that Richie Benaud had died that morning, which put rather a dampener on my spirits.

Still, by late afternoon I had got my work done and also had convinced myself that Richie would have wanted me to lift my spirits and prepare for the new cricket season, as planned. So I dug out my picnic bag, stuck the picnic crocks in the dishwasher along with the breakfast things, donned my new titfer and headed off in the direction of the shops.

Charley is very particular about his favourite picnic foods. A few years ago he became partial to my wild Alaskan smoked salmon bagels or sandwiches, but these last couple of years I could never find an example of the Pacific species of salmon in M&S or Waitrose. I raised this important matter with Daisy over the Easter and she informed me that Tesco seems to have bought up the entire UK import quota of the smoked stuff.

But could I bring myself to set foot in a Tesco Metro en route to the Mini M&S? And would such a place stock the cherished sockeye comestibles? As I got near to the grocery-store block, I asked myself “what would Richie have done?” and concluded that he would have given Tesco Metro a try in these circumstances. I entered. The place seemed quite unfamiliar – nothing like the Little Waitrose and Mini M&S. Where on earth might they put the wild Alaskan smoked salmon, if indeed they stock it at all in this size of branch?

I considered asking a member of staff, but then went through my “what would Richie have done?” thought process and concluded that Richie was a real man. Real men NEVER EVER ask directions, not even in Tesco Metro. Anyway, there was little or no sign of staff to be found. And then, as if guided by a celestial spirit, I happened upon the very aisle and the very refrigerated shelf in that aisle which contained the smoked variety of the Oncorhynchus in question (nerka). I considered letting out a bestial roar at that juncture, but that didn’t feel very Richie. I also considered gently adjusting my trousers and shaking hands with a few nearby fielders, but that didn’t seem quite right in Tesco. Had it been Waitrose, then handshakes and polite applause for the departing salmon (unfortunately caught) would have seemed perfectly in order.

Yet there was still one more fiendish ordeal for me to negotiate before I could progress to M&S for the rest of my shopping. The queue for the regular checkout was extensive, but the dreaded self- service checkout machines were unoccupied. What would Richie have done in this circumstance? “You have to take chances in this game of life,” said my inner Richie. “Those machines are 90 per cent luck, 10 per cent skill, but don’t try it without the 10 per cent skill.”

I convinced myself that I must have at least 10 per cent of the skill required to operate such a machine, so put my basket down, bracing myself for the automated reprimands about bagging areas and unexpected objects. As if from nowhere, the one free-floating member of staff appeared beside me and asked me not to use that vacant machine but to use one of the others, because she needed to do something on “my” machine. This intervention seemed excessive, given that I only had one item to buy, but I was exiled to the other bank of vacant machines, to be robotically reproached by a machine other than the one of my choosing.

Yet I emerged having purchased my goods and progressed to M&S. There I bought the other items I needed and also bought some little packets of wheat-free tortilla chips. I always thought that tortilla chips were made of corn anyway, but apparently wheat free ones are a special thing. Old friends of me and Charley will know of a legendary shopping trip while at Edgbaston a few years ago, when Charley and I debated vociferously the relative virtues (in Charley’s case) or evils (in my case) of Doritos as picnic food. “Like an old married couple rowing” was the cruel but perhaps not unfair description. Anyway, these little bags are not Doritos, they are M&S wheat free tortilla chips with lime zest etc. – which is an entirely different thing. Guaranteed to raise a continuity smile, if not a laugh, come Monday. Richie Benaud would have liked that touch.