Daisy and I happened to be staying near Chennai on the day of the South Africa v Zimbabwe warm-up match. It must have been fate. At least, that’s what I told Daisy.

We had arranged to tour Kanchipuram and Mahabalipuram that day, with a recommended early start and finish to the touring component, so I figured we could easily get into Chennai proper for an hour or so of watching cricket before dark.

Our driver, Muhtu, dropped us off and arranged where and when to collect us. We went in search of the VIP seats – 500 rupees (just over £7) a pop. None of that “50 rupee sit in the sun” business for Daisy, nor even the 100 or 200 rupee jobs on offer. This was to be a hot date, but not that hot.

A very large contingent of stewards was available to look after a not particularly large crowd, especially in the expensive seats. We were led around from the turnstiles to the VIP stand, past the smelliest latrines Daisy and I have ever smelt. They probably hadn’t been cleaned since… In fact, they smelt as though they had never been cleaned. Perhaps that clean-up job was scheduled to take place between the warm-ups and the main matches.

Then security. Daisy was led away to be searched and interrogated by a female. Ged got a big surly chap. He removed my camera from my bag. “What this?” “It’s a camera”. “No camera”. “I’m a tourist, I travel with a camera”.

He looked me up and down and then stared me straight in the eyes. “No smoking. And no photo,” he said. Where the no smoking bit came from I know not – neither Daisy nor I smoke nor do we carry smokes with us. “OK”, I said, pleased to get away without having to go through some elaborate camera deposit and retrieval system. Daisy reported that her gal had put her through a similar interview. 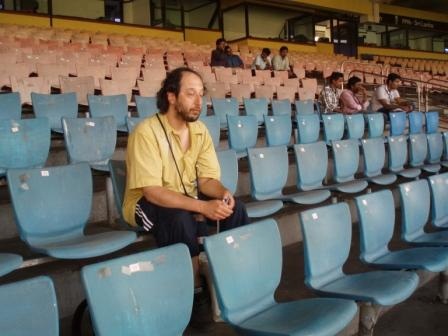 There were a dozen or so small groups of well-heeled local folk and a few more police and security officials keeping an eye on things from the very best seats behind the bowlers’ arms. Observing the few small groups of actual spectators, Daisy noticed that almost everyone was taking photos. “Sod this,” she said, “everyone else is doing it, let’s take some photos”. We started snapping.

Soon “Mr Nophoto” turns up. “I said NO PHOTO,” he says, looking mean and angry. “Everyone else is taking photos,” says Daisy. “Where?” says the selectively well-sighted official. “There, there, there and there,” says Daisy. “NO PHOTO,” he repeats and returns to a good seat with his friends, better to control us and the rest of the crowd.

Daisy then went up to “Mr Nophoto” and addressed him thus: “It’s not nice what you’re doing. We’ve been travelling all over India and everyone has been nice to us. We love cricket and have come to visit your wonderful ground. Now you’re not being fair to us. All these local people are taking photos, but you are telling us not to. That’s not nice at all.”

I start wondering how much it might cost to bail Daisy out of a Chennai jail, but Daisy had delivered a verbal doosra and Mr Nophoto’s heart was softened. “I’m sorry,” he said. “Take as many photos as you like. Do whatever you like.” And so we did.

Mr Nophoto was perhaps a bit surprised when we left just a few minutes later, but it had always been our intention to watch for a short while and get away ahead of the mosquito hour, back to our hotel for an early dinner ahead of the next day’s flight.