We’re not generally enamoured with apps, as they often seem to make the absolute least of storage space and processing power to deliver much the same content that can be found on the equivalent website.

However, as a result of the televisual shenanigans that have seen BT broadcasting this Ashes series, we have uncharacteristically seen fit to take the plunge with the BT Sport app. And we rather like it.

Phone screens don’t make for the finest viewing experience, but the way the app is set up is great for matches where half the day’s play takes place before you wake up.

Various little video snippets showing major wickets and quirkier events are presented in the cricket section of the app, but the big advantage is being able to scan the whole day’s play to watch a far greater number of meaningful events. 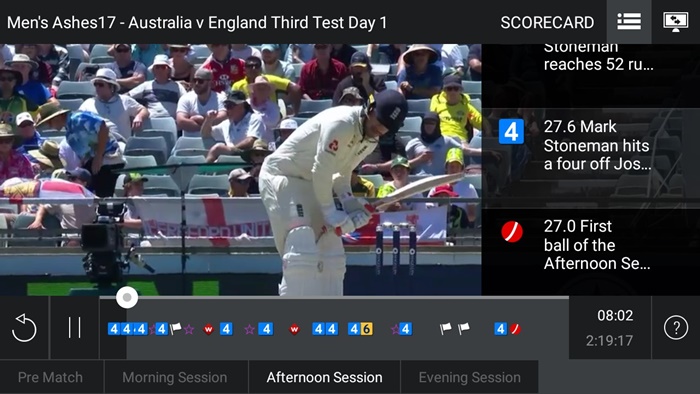 One of the things we hate most in the entire universe is the assumption that people want to watch videos instead of reading articles. The reason for this is that you can’t scan a video. You just have to sit there and tolerate it while the information drips out at a brain-aggravatingly slow pace, like olive oil from one of those dribbly pourers.

Annotated timelines are better than blue stilton on toast

In all honesty, a furious ongoing attempt to ‘get through the stilton’ means this comparison isn’t quite as complimentary as it was when we started writing this article a few days ago. But even so, the annotated timeline is unequivocally ‘a good thing’.

Maybe it’s the same on other apps, but we’re a huge fan of the smear of iconry down at the bottom of the screengrab above. It lets you pick out boundaries, wickets and chances, but also little mini highlights montages and chunks of punditry.

As you wake, bleary-eyed, it’s easy to pass a good little while catching up with cricketing events while you try and summon the will to emerge for the three hours of twilight that pass for daytime at this point in the British winter.

We’re going to give the BT Sport app a score of 9/10 because while we can’t think of what else we’d like to see, that’s only because we haven’t actually given the matter a great deal of thought.