When you arrange to go on holiday to Yunnan Province in South West China, you don’t expect much in the way of a cricket experience.

Daisy and I ended up in a village named Ringha in the high hills of Yunnan, otherwise known as Greater Tibet. There, we discovered that our guide, Palchen and his trusty friend Yunden were Tibetan folk who had been educated in India for several years and had acquired the cricket bug while there.

Delighted to learn that we are also cricket nuts, they challenged us to a match as we trekked from Ringha to Zhongdian (or Shangri-La as the tourist-marketing-obsessed Chinese tend to call it, or Gyalthang as the local Tibetans prefer to call it) across Rutapo Hill.

An altitude of 3,500 metres held no fear for us, neither for six hours of trekking nor for a couple of impromptu cricket matches. How those wimps who play at the Wanderers can describe merely half that altitude as “the rarefied atmosphere of the High Veldt” beggars belief.

This is me bowling to Palchen in the first impromptu game. 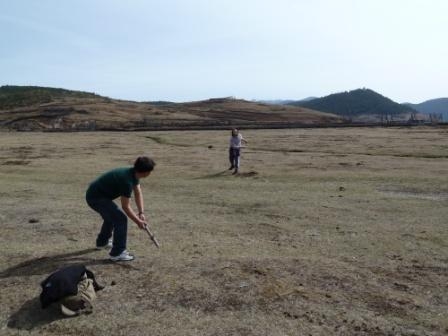 At that juncture, we had only found a rather rudimentary branch to act as the bat. The choice of ball came down to either zho dung or what I can only describe as a rather silly sod of earth (probably hoofed up by a zho). We went for the silly sod.

Daisy’s photo has captured said sod in flight. You might choose to blank out the sod and use this photo as a “spot the silly sod” competition, but I think you’d need to be very specific about the competition playing conditions.

I told Palchen in advance that I was sending him a full-bunger, as I did not anticipate much in the way of bounce from that particular sod. Despite the warning, he didn’t play the low full toss very well, so I cleaned him up on the full with that delivery.

Later, we found a rather more impressive branch for the bat (a Mongoose by comparison with the first “bat”) and a stock of pine cones to use as balls. It took a bit of getting used to, but I did manage to connect properly with one delivery and send it hurtling over extra cover further than the eye could see. At 3,500 meters, if you hit something, it really stays hit, believe me.

I cannot promise that the following picture shows the actual precursor to that classic shot, but it might. In any case, Daisy came up trumps again with the delivery captured in mid air. 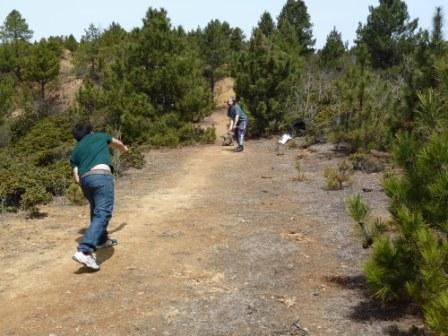 After my classic shot over extra cover, Palchen and Yunden naturally conceded the match, claiming lack of practice over the past 5-10 years as their excuse. A great victory for England over the might of Tibet.

Send your match reports to king@kingcricket.co.uk. On no account mention the cricket itself, unless it’s this kind of a match, in which case we want every detail.