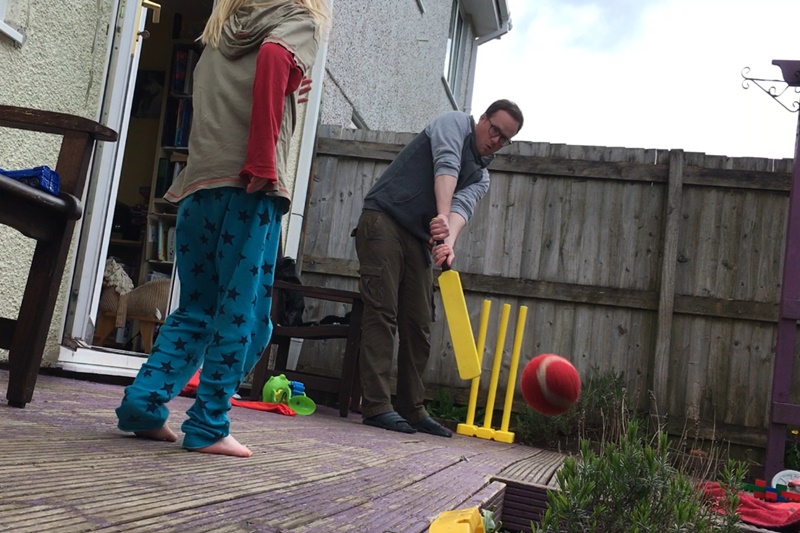 Send your match reports to king@kingcricket.co.uk. We’re only interested in what it was like to be at the game, so if it’s a professional match, on no account mention the cricket itself. Conversely, if it’s an amateur match, please go into excruciating detail.

There’s a lot of nonsense spoken about early season conditions in England. Batting in April isn’t that difficult. Of course, it helps if the bowler serves up a feast of slow full-tosses. And if he’s six years old.

On the day it emerged the ECB was considering replacing ‘wickets’ with ‘outs’ in the game’s new format, with whose name I shan’t sully these pages, the small people in my house suddenly began to show a previously non-existent interest in cricket. Coincidence? Yes.

We started in the back garden. Plastic bat, yellow stumps – minus lost bails – and a small red tennis ball which soon disappeared into the neighbouring yard at cow corner. Just getting my eye in.

An audacious reverse ramp over backward point heralded a change in tempo, and after the luncheon break play resumed at the beach.

A sandy surface providing little or no bounce might be seen as a challenge. But once again, our naïve young seamer declined to use the facilities and was dispatched over his head, straight into the ice cream stall and out again. ‘Don’t bowl there, son.’

The girls decided they wanted to – if I may borrow a tired Vaughanism – ‘come to the party’, at which point proceedings descended into mild chaos.

There was still time for my wife to grace the crease for a little do. Ball in hand, I attempted a rib-tickling bumper, to push her back and keep her honest. But the ball stuck in the pitch and dribbled through for a double-bouncing leg side wide.

‘We’re cricketing!’ exclaimed the youngest from a very short, extremely silly mid-off. And we were. What a terrific day.