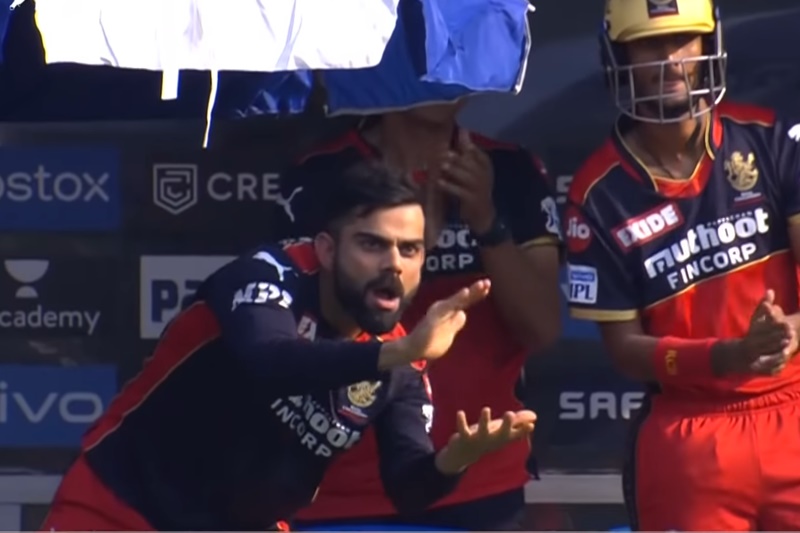 If Virat Kohli has a defining quality, it is faintly-unnerving intensity. Remember that time he was basically livid about beating Australia? Or all of those very many times when he celebrated a hundred with incandescent rage?

We’re if not quite numb to these displays by now, then at least acclimatised to them. The moments that really strike us are therefore generally quirkier ones from the margins of the game.

This week Kohli’s Royal Challengers Bangalore beat Kolkata Knight Riders by 38 runs. Kohli was out in the second over and, as is so often the case when he’s failed himself, he made doubly certain to be ostentatiously satisfied with his team-mates’ success from then on.

Only he clapped him really weirdly. Thrusting his hands out from beneath an IPL parasol, he went with an elevated, overarm, top-hand-downwards clap.

That is not how a human being claps.

Human beings clap horizontally. You can see his team-mates executing textbook human claps in the image above. (One of them is literally open-mouthed with incredulity at Kohli’s technique.)

Kohli’s top hand then rhythmically clapped the bottom hand downwards in what appears to have been a gravity-assisted battle for supremacy.

The image above is roughly where he bottomed out and he just persisted with his up-down clapping in that bent-over, arms-out position.

At no point did his facial expression make any kind of sense.

His eyes appeared focused on something actually inside Maxwell and we can only presume that his mouth remained open because he was slowly and invisibly inhaling his team-mate’s essence, like the ghostly vampire from Soul Reaver on the PlayStation.