Some months ago myself, Price and the so-called ‘Will’ (from String’s Oval match report) organised a weekend of watching some comedy Scottish football and staying up through the night to watch something happening on the other side of the world.

Unfortunately, whilst Price was able to catch a train up from the big smoke without too much hassle, the so-called Will had to cancel his attendance due to flight disruption. Then the football was cancelled.

Having met Price at the train station, we went straight to the first decent pub, in fact the first pub, that you can get to when leaving Edinburgh Waverley, The Guildford Arms.

Whilst in there, I stood next to a gentleman whom I recognised. It took until the end of my first pint to realise it was ex-England rugby player, South African Mike Catt. Later, as we were putting on our coats, Mike came over to us and said to me ‘I recognise you’.

It turned out Mike Catt wasn’t Mike Catt at all and was in fact the father of one of the children in my class. We shared a slightly uneasy conversation, both aware we hadn’t realised who the other one was for the best part of an hour.

We reached our next pub, The Conan Doyle, from cricket bat and stumps in an unusual place and £1 a pint of Guinness fame. Unfortunately, The Conan Doyle has had a bit of a makeover since then and at least £1 has been added to the price of all drinks to pay for it. Disappointed by this, and the slightly pretentious crowd it was now attracting, we retired to The Windsor Buffet.

It was at this point that Price and I took it upon ourselves to document the rest of the evening, as best we could, using Venn diagrams.

Now, before the report shares any of our diagrams for public approval/consumption, a point needs to be made. The several pints of ale we had consumed up to this point might have hindered the statistical reliability of the diagrams.

Our first diagram concentrated on that moment in time. 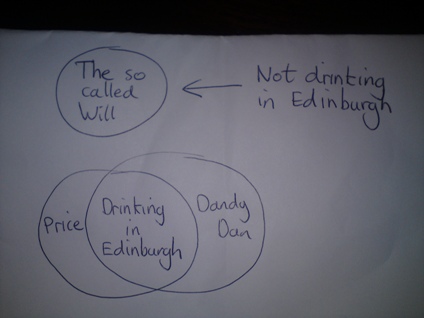 It occurred that due to the so-called Will’s lack of presence, we’d missed out on the opportunity for a historic three-way Venn. Fortunately that was rectified shortly after. 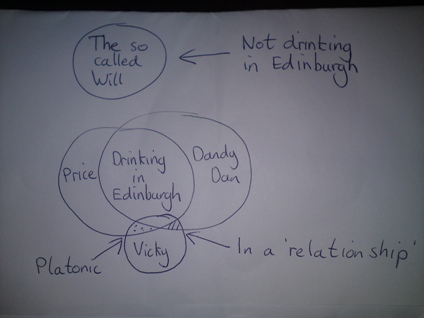 For whatever reason, the subject matter then changed somewhat to a trip abroad some years before. 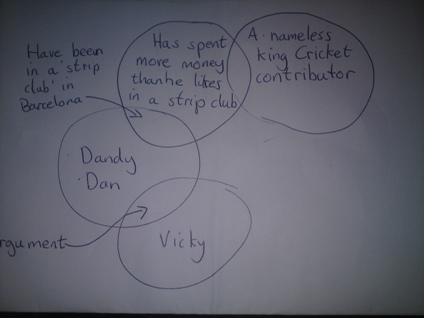 Some more ales down the line, we thought it would be a good thing to document Price’s recently failed relationship in Venn form. 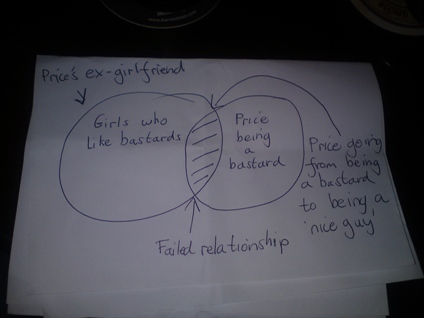 After this we noticed that ‘Evil Pub Dog’ was terrifyingly interested in what we were doing. 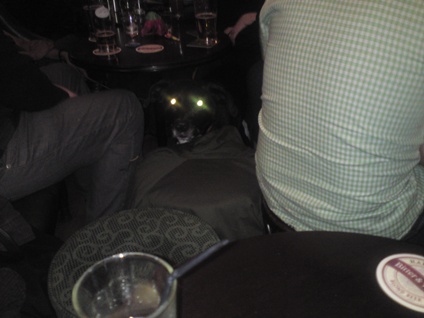 Whilst I was in the toilet, Price took it upon himself to produce his own Venn. Alas, the many ales we had consumed had taken their toll on his ability to communicate through mathematical diagram and he produced this frankly incomprehensible effort. 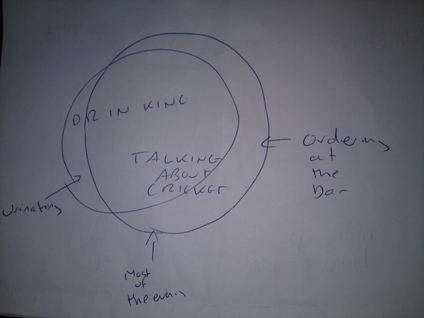 After this, we decided to retire to my sofa and fall asleep at a disappointingly early time. Again.

The following day we reflected on our previous night’s work, with Price declaring us to be two of ‘life’s great achievers’ – a statement I think is difficult to argue with.