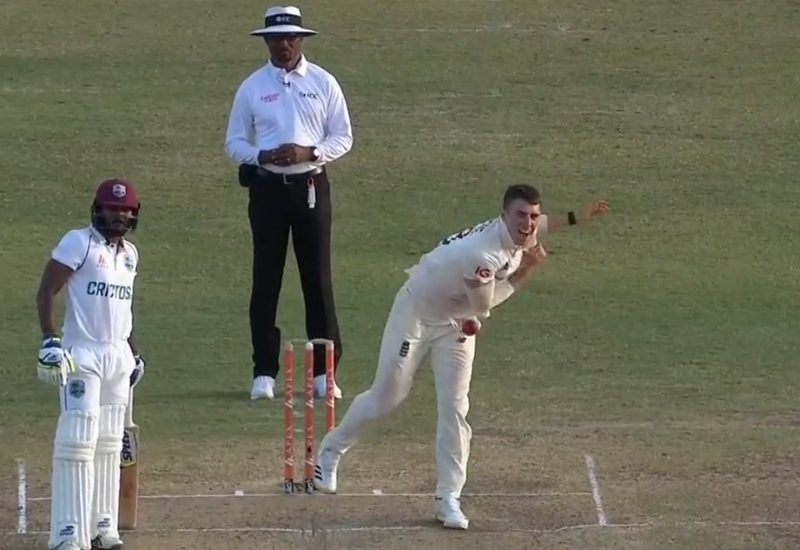 Every bowler has their own bowling action, but Dan Lawrence’s is more obviously his own than most. These are the three best moments in it.

Not wishing the batter to be under any illusions that he might be about to see a normal bowling action, Lawrence commences his run-up by unnecessarily throwing one arm behind him.

This sideways golden eagle wing flap then segues into him dragging the ball towards the crease as if it’s very reluctant to be bowled.

Given the dizzying nature of what follows, perhaps it is.

The flail-and-drag is only the third-best part of Dan Lawrence’s bowling action. Next, he goes into what we quite-possibly-incorrectly believe is called “the gather”.

Maybe it’s not called the gather. It doesn’t really matter. It’s the bit where the ball’s up and about to go back as he gets into his delivery stride. If you look at the image above, it’s easy to visualise what should happen next.

Suddenly – and quite unexpectedly given there doesn’t really seem to be enough time to squeeze in superfluous extra movements – Lawrence shoves the ball down towards his nuts. His knock-kneed leg position implies there may be a slight grazing when he executes this element.

This groinal-jab is the second-best part of Dan Lawrence’s bowling action.

After that the ball goes back up, ready to definitely, definitely, immediately be bowled in entirely normal fashion.

As Lawrence leaps to deliver the ball – with the deadline for getting it into position for the whole whirly-round actually-bowling-the-thing bit drawing ever nearer – he flaps the ball down into his own armpit for a nanosecond.

It’s hard to express how fast and needless this bit is. The ball’s already been up and down and up again and it now needs to be alongside his left hand – exactly where it just was – so that it can be bowled.

Because of how unnecessary it is and because there’s no time for it and because it really should derail everything completely but somehow doesn’t, the armpit flap is the best part of Dan Lawrence’s bowling action.

It’s all a lot less interesting after that. Just bowling the ball and cricket and whatnot.

Speaking of weird deliveries, here’s how you can get the King Cricket email.