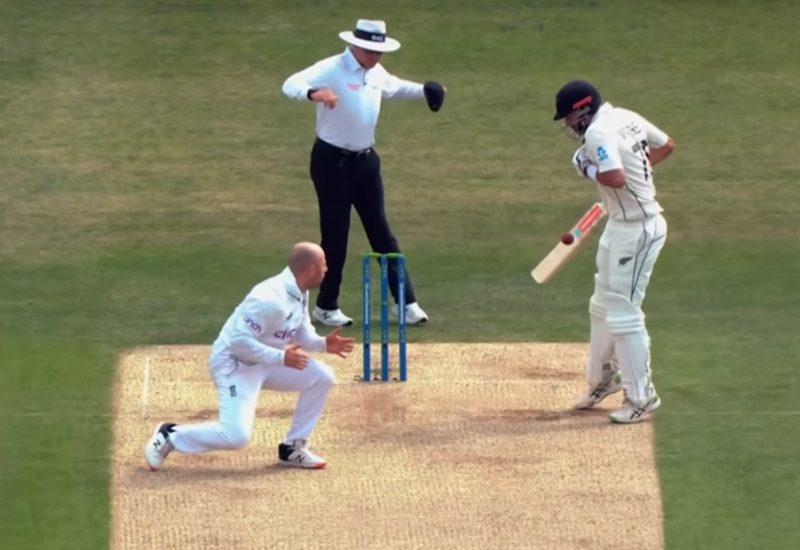 Henry Nicholls getting pinballed out off his batting partner was a very, very weird wicket. Yet somehow we can’t say with certainty that it was even our favourite dismissal of the day.

On day one of the third Test between England and New Zealand, the man who – thanks to the commentary of his countrymen – we can’t help but think of as ‘Hinry Knuckles’ slammed a drive towards his batting partner.

Daryl Mitchell’s form is currently so magnificent and the gravitational pull of the sweet spot of his bat so irresistible that he unavoidably middled the ball even as he was ducking for cover. Alex Lees took the catch. Nicholls was out.

If you watch Mitchell as it happens, his left arm flinches massively, whereas his right arm is in contact with the bat and therefore retains its BATTING SUPERPOWERS.

That side of him thinks the better course of action would be to play the ball perfectly. It’s quite incredible really. He actually watches the ball right onto the middle of the bat.

Just think of all the contradictory messaging that must have been bouncing around Mitchell’s brain for those movements to happen. We swear his arm has reluctantly accepted ‘evasive manoeuvres’ only on condition that it is still allowed to hit the ball perfectly.

But as weird and wonderful as this dismissal was, we’re not totally sold on it being the funniest and therefore best of the day. Because Will Young got out too.

This one may have passed you by a bit because it was, on the face of it, a pretty straightforward dismissal: Jack Leach came on to bowl the 13th over, Young missed the first delivery and was out LBW.

But it’s all in the review. We LOVE a terrible review.

And just look at this beauty.

Pitching middle, hitting in line with middle and going on to hit middle two-thirds of the way up.

“Oh, so what?” you might be thinking. “We’ve seen loads along those lines and we’ll see loads more.”

However… there is one final detail about the Hinry Knuckles deflect-o-catch that we haven’t yet mentioned and that may still give it the edge. That thing is the contribution of umpire Richard Kettleborough.

We’ve featured Kettleborough on this site before. We assumed his appearance then was a one-off, but apparently we’re now staking a claim to being the internet’s number one Richard Kettleborough reactions news site.

Kettleborough’s reactions are sufficiently good that he very quickly realised that Knuckles’ drive wasn’t heading in exactly his direction. This led him to execute a rather wonderful matador-style ‘olé’ move to allow it to pass. This was only faintly undermined by Mitchell unexpectedly drilling the ball right past his frigging earhole at the last nanosecond.

As you can see from the image above, the ball safely passed Kettleborough while he was performing this stylish dodge. It didn’t pass where he thought it would pass (to his left), but it still passed safely.

And here we get a marvellous demonstration of reaction times because this tells us that the ball had already completely missed Kettleborough before his brain could deliver the instruction to shit himself in panic.

So with respect to Will Young and his decision to ask the third umpire to check how plumb that LBW was, maybe Henry Nicholls getting pinballed out off Daryl Mitchell was the best wicket of the day.