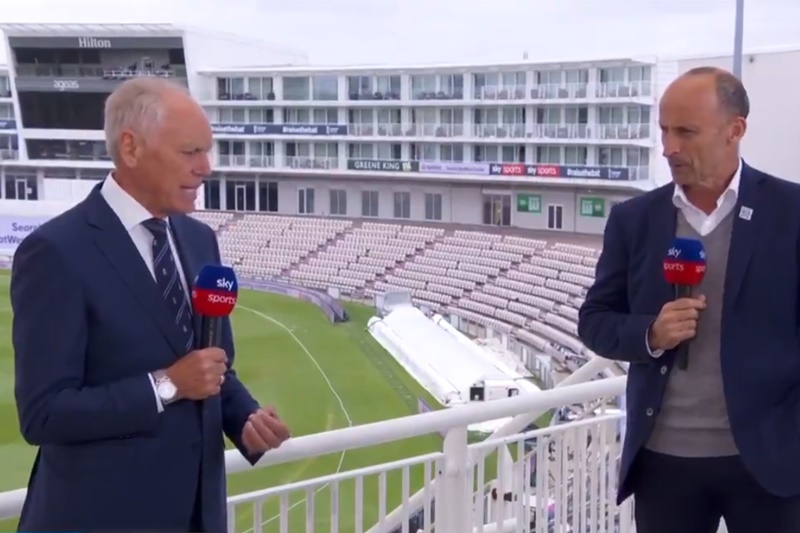 You might be expecting some sort of pithy takedown of Colin Graves’ tenure as ECB chairman here. Don’t get your hopes up. Our headline is brutally literal.

We just watched Graves defending The Hundred and other things on Sky Sports and it struck us that his hand gestures were feeble.

That one at the top of the page – that’s him saying, “I think they’re beginning to see the reasons *why* we’re putting it together.”

And here he is saying, “I think they’re starting to see the excitement of a new competition.”

This next one’s for, “I think they’re starting to see as well that we’re attracting a new broadcaster to it.”

But this next one’s the clincher.

This is for, “I think they’re starting to see all that thing coming together.”

Now that is pathetic.

In our parallel life as a cycling writer, we have spent an awful lot of time watching Team Ineos boss Sir Dave Brailsford talking with his hands and we know for a fact that Sir Dave would have given “together” enormous physical emphasis.

Sir Dave is the benchmark for talking with your hands. And it is surely no coincidence that he has helped British cyclists win a zillion Olympic gold medals and a whole bunch of Tours de France.

‘Together’, ‘team’, ‘unit’ – these are words for which you really need to convey closeness. Say what you like about Sir Dave, but uttering the exact same words as Graves, his hand gestures would have left you in no doubt whatsoever that everything was indeed ‘coming together’.

Conversely, look at Graves’ hands again and tell us that everything isn’t in fact slowly falling apart like a loosely-packed ball of kinetic sand.

Now this is how it’s done.

This is Sir Dave saying “selecting” earlier this week.

See how his hand is very precisely ‘selecting’ something?

“Oh, that’s very precise,” you think upon seeing that. “Team Ineos are being very precise when selecting their team.”

You think this even though what Sir Dave’s actually telling you is that they aren’t picking the lad who won the Tour de France the year before last or the other lad who’s won the race four times, because even though they’d planned to pick them both, neither is in fact in any kind of shape to actually compete.

Now here he is gleefully slapping his hands together to indicate “a big challenge.”

“Ooh, that’s exciting,” you think. “The rider he’s talking about now has a really big, exciting challenge ahead of him.”

You think this even though the challenge in question is racing a slightly-lower-profile race instead of competing for the Tour de France.

In the same short video, Sir Dave does similar things for “opportunity”, “highest level”, “excited” – words like that.

Here’s him saying, “put that team together”.

You can actually see him putting the team together!

You can see him thinking about the job of putting the team together and carefully ensuring that all the different bits fit together correctly.

He’s absolutely bullshitting you, but it’s also kind of convincing.

Hey, you there! Why don’t you sign up to receive this kind of worthless nonsense by email?