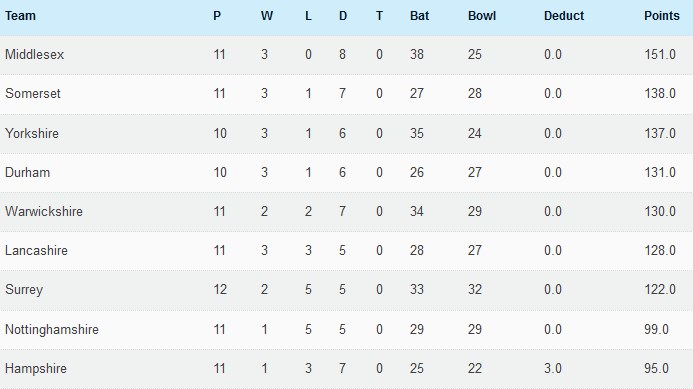 As you can see, Middlesex are still top. Somerset and Yorkshire aren’t a million miles away and the latter have a game in hand, as do Durham in fourth.

George Bailey – remember him? He scored a hundred for Middlesex. Jason Roy, in his four-day middle-order guise, did the same for Surrey. Zafar Ansari took 4-63 in the fourth innings.

In a low-scoring game, it’s probably worth naming all the batsmen who made fifties: Travis Head (who’s playing for Yorkshire), Rikki Clarke, the alphabet-straddling AZ Lees and Jonathan Trott. Adil Rashid took 4-29 in the fourth innings.

Will Smith made a double hundred. We made him ‘one to watch’ once. Twice, actually, but the 2009 thing about him isn’t really worth linking to.