It was agreed that The Australian and myself would enjoy a weekend of camping up at Peterborough with our acquaintance Price and some other lycra-clad rowing folk. There was rumour of naked rowing, pole climbing and general debauchery being on the cards, so this seemed like a good way to spend a weekend instead of being glued to a very important international cricket match that might happen to have been taking place at the time. At least we had my trusty wind-up radio to keep us in touch with proceedings.

As we left the M25 and headed towards the Fens, it transpired we were losing radio reception. Gone was TMS and Radio Two. All we had was Radio Banjo (it may or may not have really been called that). This station brought us many rock classics such as Holding Out for a Hero, ZZ Top’s Gimme All Your Lovin’ and Crazy Horses by The Osmonds.

Once at our camping plot we debated how to erect our newly purchased tent, myself favouring the military precision attainable only from Duke of Edinburgh Silver, whilst the Australian seemed to prefer the more lackadaisical approach associated with his homeland. It’s fair to say the tent took a while to put up.

Total absence of radio reception meant that we were forced to find other forms of entertainment for the weekend. This took the form of doing some racing in boats, drinking cider, shouting at people doing racing in boats and playing cricket with a children’s mini set we took along. This was the highlight of the day. I recommend having a set at hand to placate any persons bored of racing in boats.

Later that evening one of our number decided to twiddle some firesticks, which was a most impressive spectacle. Upon sober reflection the next morning, it may have been safer to have played with Price’s KC Top Trumps as a way to pass the time in such close proximity to highly flammable tents.

The following morning The Australian cooked me and Price some sausages on the barbecue, which was very nice of him. 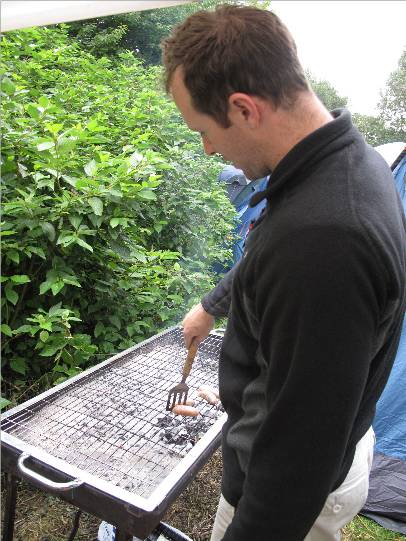 We had lent Price our spare tent. He had spent the evening watching a naked midget climb a marquee pole, then retired to the tent to be to be gently spooned by a hairy Liverpudlian called Dave.

Sunday continued in much the same vain as Saturday, but with less excitement, so we headed home after lunch, looking forward to catching up on the weekend’s progress and to watching the evening session of play.